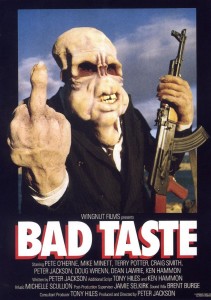 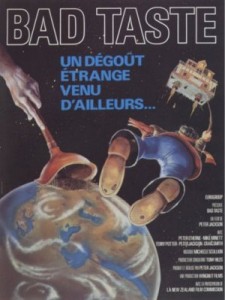 I’m pretty sure that Bad Taste was the first truly low-budget movie I ever loved. I had seen a few here and there, but my dad’s hatred for shitty horror movies made it so that the first half of my life was pretty devoid of low-budget stuff. I’m still chasing the dream of tracking down all those lovely horror films I’ve never seen. Anyway, by the time I acquired Bad Taste, I was a pretty big Peter Jackson fan. The DVD I own (the 2-Disc Limited Edition) was released to coincide with the theatrical release of Jackson’s then latest film, The Lord of the Rings: The Fellowship of the Ring. I ended up watching that film seven times in the theater, and in one of my many trips to the local Best Buy, I spied the DVD cover for Bad Taste emblazoned with the proclamation “From the Director of Lord of the Rings” above a gnarly looking alien giving the finger. I had to have it. I very rarely blind-buy movies, but this cover (and Jackson’s track record) were more than enough for me to take a chance.

The film starts out rather slowly, with Derek (Peter Jackson) and Barry (Pete O’Herne) investigating a deserted seaside town infested with mindless zombie aliens. During this slow-ish opening, I remember questioning my decision to buy the movie. “Oh geez, this is pretty bad,” I thought, “I hope it gets better.” And truer words have never been spoken. Bad Taste not only gets better from there, it ascends to gory, comedic heights so grandiose and incredible that I am still in awe of how they were produced, even after watching the film at least 15 times. Low-budget films would usually never attempt half of the wild shit contained in Bad Taste, but thanks to his love of special FX and his ability to craft them himself, Jackson was only limited by his imagination. In that way, Bad Taste reminds me of the recent Father’s Day, and it makes me want to give that one another shot.

Due to Jackson’s FX focus, Bad Taste is the opposite of a traditional low-budget film. Instead of only a few FX and mediocre execution, Bad Taste bombards the viewer with gross-out gore and some of the best horror comedy ever to grace the screen. I say this completely without hyperbole: there is not a single missed opportunity in Bad Taste. Never once in the film do you witness a scene and say, “Ah damn! I wish they had shown that!” or “Ahhhh! Why didn’t they do this instead of that?” You’ll be too busy laughing your ass off at the wild fun of Bad Taste, one of the rawest and most pure displays of talent and passion I’ve ever seen in film.

Bad Taste also represents a filmmaker that knows exactly what he wants to do with the camera. A lot of the movie is simple action without a lot of dialogue, and Jackson’s ability to tell a story with the camera is excellent. Through editing, Jackson plays dual roles in the same scene, even staging a fight between his two characters, but it’s done so well that if you didn’t know, you’d never notice. The camera is also very active, sweeping around actors and creating small-scale versions of the same techniques he would later employ while making his big-budget stuff like Lord of the Rings. And here he made all the camera equipment himself! If every yahoo with a shitty digital camera could crank out this level of quality, the world of low-budget cinema would be a much different place. Instead, we’re stuck with a sea of shit, because where Jackson was brimming with talent and ingenuity, every yahoo with a shitty digital camera is not.

I also can’t ignore how clever and consistently funny Bad Taste is. The film is a riot for those inclined to laugh at things like a man stuffing brain matter back into a hole in his head, or awesome guitar rock that blares every time the boys jump into action. A lot of low-budget movies blow their wad right at the get-go to snare you into watching the movie, but Bad Taste patiently waits in the shadows and slowly ramps up its pace into a fever-pitch finale that is hands-down one of the most satisfying endings in low-budget cinema history. Like the charity collector that happens upon one of the aliens eating the brains of his comrade out of his exploded head, an unsuspecting viewer might be taken off-guard if they’re not ready for this movie. It’s gory, disgusting and a very acquired taste. The hilarious insanity here is only bettered by Jackson’s own Braindead (AKA Dead Alive), easily the most balls-out, goriest, gore-a-thon, gorefest movie there will probably ever be. But that film will have to wait for another day…

So if all that didn’t make it apparent enough: I love Bad Taste. It’s one of my most favorite movies, and watching it for something like the 15th time only solidified its place even more. Goddamn, Peter Jackson is way too good at horror comedy not to return to it one of these days. He promised a zombie movie after he finished Lord of the Rings, but so far that hasn’t materialized. At one point in the ’90s, he even expressed interest in making Bad Taste 2 & 3! If only! I love the filmmaker that Peter Jackson has become, and I love the filmmaker that he started out as. But I can’t wait to see the filmmaker that emerges when the two halves of Peter Jackson inevitably convene. It’s gonna be sweet.

Bad Taste, like Citizen Kane, is one of the greatest directorial débuts of all time. It showcases raw talent, passion and a true understanding of the art. Film students should especially take notice of the work that went into the film, as you could literally teach an entire course on amateur filmmaking via the methods employed in this film. I’d also recommend the short making-of documentary Good Taste Made Bad Taste, which is a great look at the making of the film, as well as Jackson’s childhood films. If you care at all about Peter Jackson or filmmaking in general, it’s absolutely essential viewing.

I defy any fan of horror comedy to watch Bad Taste and not enjoy the shit out of it, and even those that don’t count themselves as fans of the genre should look into it as it may awaken something inside you like it did for me.

The bastards have landed!

Bad Taste was a Reader’s Choice selection from my old partner in crime, Uncle Jasper.