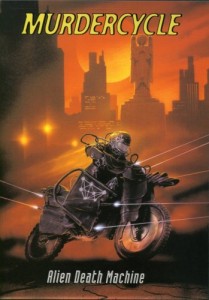 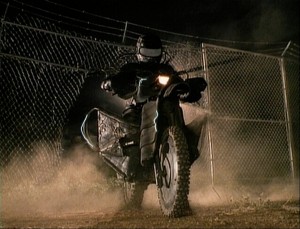 From here the story takes a nosedive, which is a shame as that’s only a couple of minutes into the movie, but thankfully the film’s bad acting and dialogue more than make up for the story deficiencies. After that thrilling opening, we’re introduced to a covert ops strike force, who are briefed and dispatched to see what the hell’s going on. And by “covert ops strike force” I mean a crazy sergeant who’s drunk and just shy of blowing his brains out when we meet him, a telepath with one of the most annoying hairstyles in cinematic history, a couple of wet-eared grunts, and a couple of CIA suits. Only the best for this operation, or as the government man at the end of Raiders of the Lost Ark would say, “Top men.”

Oh, and remember that old government installation where the meteor landed? Turns out that in the light of day, the place is actually an old Western town. When they said it was a defunct installation, I thought maybe it would be from the ’50s or ’60s, but apparently that was the 1850s or ’60s! So while the movie itself is pretty bad, the interesting group of iconography we’ve got going for us is pretty solid. Oh, and did I mention that the alien has Predator-style thermal vision? Again: Now that’s what I call entertainment! 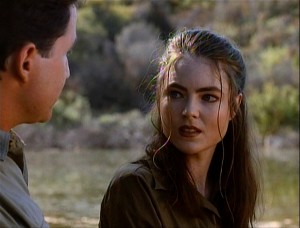 I will admit that there’s also a hidden enjoyment that I got from this movie which a good amount of people won’t be tapping in to. The movie was filmed about a half-hour from where I grew up and lived for 26 years, so not only do I recognize the hills, it’s fun to imagine that while I was going about my business during my senior year of high school, just down the road a ways someone was riding a tricked-out alien death machine around a ghost town and blowing shit up.

Murdercycle is a pretty poor movie in the grand scheme of things, but it offers much more entertainment than I expected it to. The cover art is also misleading and makes you think the movie might be set in some cyberpunk, Blade Runner-style city. While gathering some info for this review, I found out that the film was originally to be produced during the Empire International days and this artwork was made for that version of the film. At that time it was called Battle Bikes (with Murdercycle being an alternate title), and was presumably a much different film.

I’d recommend Murdercycle to anyone that is willing to just let go and enjoy the movie for what it is: a tortured story of a man, his alien death machine and the people who want to stand in his way of a good time. The real movie isn’t specifically about that man riding the dirt bike, but making up your own story is a lot more interesting than the actual government cover-up story presented here. Also if you’re a fan of dirt bikes crashing through doors unannounced, you’ll get a fair amount of enjoyment out of this one. Murdercycle may not offer a lot overall, but what it does offer is pretty damn fun.

Next week on Full Moon Tuesday, I’ll be delving into one of Full Moon’s sex comedies, Test Tube Teens from the Year 2000 AKA Virgin Hunters.