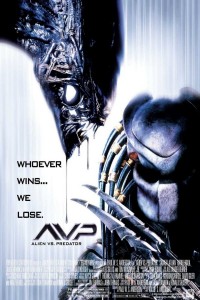 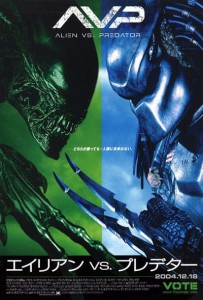 Well… hopefully they are. It would be easy to write this movie off and not even bother seeing it. That’s exactly what I did for the past eight years. But as an Alien and a Predator fan, I think you’re doing yourself a huge disservice by not diving into this movie. No one will argue that this movie isn’t trashy, because it totally is. Big time. But what I will argue is that it is remarkably good trash, and it’s the epitome of the term “popcorn movie.”

And all the more surprising to me was just how reserved AVP was during the first half or so when it’s mostly concerned with tension-building and slowly unfolding the film world for the audience. I’m a sucker for this kind of slow burn, and the burn is a sweet treat in AVP. This might seem like a film you’d want to bust out guns blazin’, but trust me it works. And then when the action hits, it’s an almost non-stop ride of “Oh shit!” and “Goddamn, that motherfucker got fucked up!” moments. Until I watched AVP, I never realized that all throughout the proper Alien series, we don’t see too many of the aliens actually being killed. In AVP, the Predator makes up for lost time and performs some ridiculous, stunning kills that truly deliver. 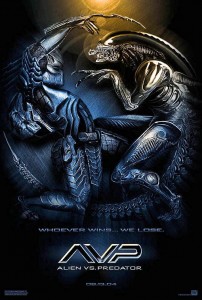 Now I know what you’re saying, “Will, have you forsaken your quest for hating ugly, over-the-top CG?” No, I still hate stupid CG just as much as the next Internet nerd, but I hate it a lot less when it’s FUN AS SHIT like it is in AVP. And besides, many of the FX were actually practical! I was shocked. The sets were also super fun, with more hieroglyphs, ancient traps and giant Predator statues than you can shake an alien fetus at (which reminds me of a gnarly alien fetus kill by the Predator that had me howling). Unfortunately, almost all the blood is CG. I hate CG blood, but taking this as a sample, CG blood has come a long, long way since 2004. I should also note that I watched the Unrated version, as it adds in a lot of blood and gore that was edited out for the PG-13 theatrical release.

I also want to single out the sound design of the film, as it creates a creepy, thick atmosphere amidst fabricated ancient ruin sets that could have easily looked cheesy. It’s incredible how much power sound has to bring the illusion of movies together, and a film like AVP relies heavily on its sound department. The visuals are a huge part of movie magic, but it’s the sounds that really sells them to the audience and makes them work.

I expected to hate it, or at the very least slightly enjoy it, but I loved AVP. It was pure fun from start to finish and it ends on a really promising note that leads into the sequel. If that one is as fun as this, then I can’t wait! AVP had everything I could have ever asked for in an AVP movie. The pyramid setting satiated my love of Indiana Jones-style, trap-filled ancient ruins, the Alien is still a royal bitch, and the Predator is most definitely still an ugly motherfucker. Do yourself a favor: ditch your expectations and have a blast with AVP. I think you’ll be pleasantly surprised just how much fun it is.