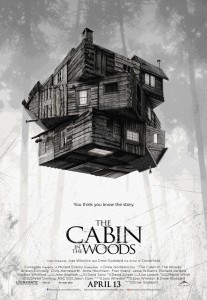 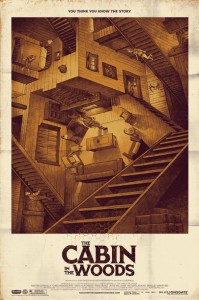 Horror movie fans know the drill: five friends drive up to a secluded cabin in the woods and proceed to unleash some hellish force of demonic filth upon themselves. It’s tried, it’s true and it’s clichéd for a reason; it’s the perfect setup for a gory horror film. But this is not the only storyline presented in The Cabin in the Woods. Right from the opening scene, it’s clear something is amiss, and I was shocked at the blatancy of the filmmaker’s exposition. “Wow, are they really showing their hand already?” I thought. They were indeed, but obviously they were only revealing a small piece to get your wheels turnin’. I love this theoretically, it’s just that the actuality of watching it is kind of mundane and boring.

Because of this story conceit introduced right from the get-go, none of the scenes in the cabin hold any weight. None at all. Where there should be tension, it’s an apathetic sigh. Where there should be fun FX, there’s kills in lighting so dark I often couldn’t tell what was going on. Perhaps this calls out my television setup, but as it’s been fine for every other movie (except the ones with SHITTY LIGHTING), I’m going to err on my side.

So whatever, there’s no tension, big deal. At least that other, concurrent storyline is interesting, right? Well… actually, it kind of is. I have to give them credit, they pulled off a good game, making me think it was actually one thing that was going on, before I went all sci-fi and thought it was something else, and then my brain moved in a completely different, more metaphysical direction. When the big reveal finally came, I was pleasantly surprised and I enjoyed it quite a bit. But again, I don’t think the way it plays out was fun to watch, but it is a great and interesting premise.

And that’s how I feel about The Cabin in the Woods: I didn’t really enjoy watching it, but the premise is interesting. I get why people think it’s cool, and it’s all referential and meta and all that, but I just can’t find it in me to stomach it. Since when did movies that reference movies become better than actual movies? Thanks, Tarantino. You make fun movies, but your influence is really getting to annoy me. Oh, and on top of all that, this isn’t even a fucking horror movie. It’s something of a science fiction/fantasy tale that chose to use horror movie iconography to define itself. I’ll take a real horror movie any day of the week.

And with this, we close out another year of Silver Emulsion’s Horrific October! I’m already excited for next year!