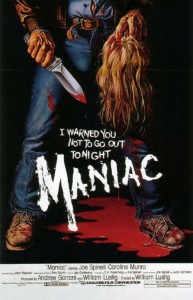 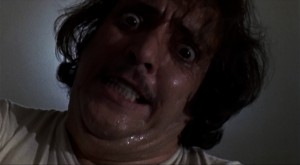 What I really find interesting about Maniac is the choice to focus solely on the maniac. Instead of peppering the film with characters we don’t care about that will die in a few minutes, the only true character is Frank. This might sound boring, and for some films that would definitely be true, but trust me when I say that in Maniac it works beautifully. It’s one thing to encounter the slasher villain as he murders a couple gettin’ busy in a car, but it’s another thing entirely to then follow him home and watch as he talks himself to sleep, handcuffed to a mannequin with a victim’s scalp nailed to its head. Because of this shift, it’s not just a slasher film, it’s a film that puts us into the point of view of the slasher, all without resorting to the Argento method of voyeuristically shooting the murders from a first-person perspective. It’s all brought to life by Jay Chattaway’s brooding, pulsating score, matching the images perfectly and setting a grim mood.

Savini’s FX work here is perfect. Not near perfect, not pretty damn good, but perfect. Every moment is skillfully executed, with editing that perfectly sets up the FX shots and makes them pay off in the best way possible. They’re incredibly realistic, and perhaps the most affecting work I’ve seen from him. I don’t want to spoil anything, but the fucking end of this movie is nuts! Dawn of the Dead‘s uncut version may feature more extreme uses of violence, but the final moments of Maniac had my mouth wide open in a god-awful wince of pain. It’s a moment unlike anything else I can remember, and, of course, I loved it.

Filled with guerrilla filmmaking ingenuity and intense, gritty violence, Maniac is one of the best slashers I’ve seen. It’s sadistic and depraved for sure, so it will only appeal to a select crowd, but those attuned to like this film will really like it. Lustig continues to impress me with his ability to craft incredibly well-made, low-budget films that never feel like their budget was an issue. I know this review is a little shorter than most, but I really don’t know what else to say. If you’re a horror fan and you haven’t seen the film already (like me), then definitely check it out!