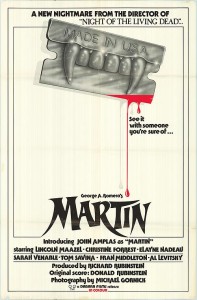 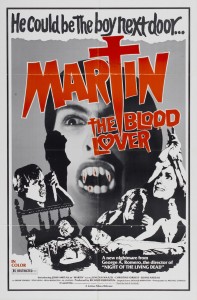 And that’s a good thing, as Martin is definitely one of the most unusual horror tales I’ve ever seen. I can’t say that I was blown away by it, and it definitely didn’t live up to my expectations built up over many years, but it is completely unlike any other vampire story I know of. The switches Romero makes to the mythology are fantastic, taking the vampire from the Gothic, romantic figure of our dreams and making him an awkward, lonely teenager who methodically murders his victims. Is Martin truly a vampire, or is it all in his head, planted there by the wild accusations of his Old World, vampire-obsessed granduncle? He kills the first girl prior to arriving at his house, though, so if he’s not a vampire, then someone else in the family planted the idea in his head. He does start the film on a train, traveling away from somewhere, and his granduncle is waiting for him, so this suggests that someone sent him there, and that they hope Granduncle Cuda can deal with the problem. This supports the theory that Martin is truly a vampire, but the question is left open-ended so it’s really up to you.

Romero made this film directly before his magnum opus, Dawn of the Dead. Martin feels considerably smaller in scale and budget (as it is), and the filmmaking feels completely different. By taking away the supernatural elements of the vampire, and by making some artistic edits along the way, Romero successfully took the horror film out of the grindhouse and moved it into the arthouse. Vampires are not generally arthouse fair, and this month I’ve happened to review a couple of contenders (Near Dark & Let the Right One In), but both of those films actually featured a lot of genre thrills to go with their generous helping of artistry. Martin is mostly slow-moving and aloof, but when it does see fit to unleash the genre thrills, it does so with incredible force and unforgettable imagery. 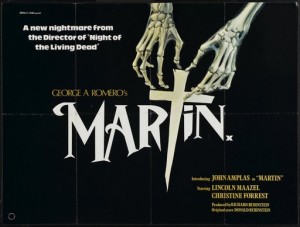 The opening is a great example of how intense the film can be, with its brutal depiction of Martin drugging the innocent woman and fighting with her in her cabin. A later scene involves Martin going up against a man and a woman simultaneously, and the film mirrors Martin’s exacting efficiency in dealing with threats. You never get the sense that he’s sadistically interested in hurting people, instead it feels like action borne out of necessity. It’s in these moments when Martin does feel like a true vampire, albeit one that exists within our world and not the world of fantasy. I often think about how if we ever do find some mythological creature, or aliens venture down from the heavens, they’ll be so completely different from what we expect that they’ll change everything we’ve ever thought about them. And this is exactly what Martin is to traditional vampires.

As much as I did enjoy and respect Martin, it is rather slow in spots and it feels quite distant emotionally. It doesn’t feel like one I’d ever really need to revisit, although time could change that. It’s hard to connect with any of the characters, so really hunkering down and getting inside the movie is tougher than it should be. I did like this one a lot, though, and I’d definitely recommend it to horror, arthouse and Romero fans. It’s definitely not your standard horror movie, but in this day and age when nearly every horror movie is formulaic, PG-13 shit, a look back at Martin will remind you why the best horror films were always independent.