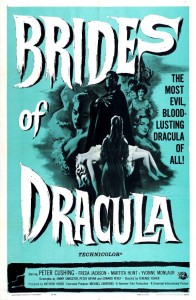 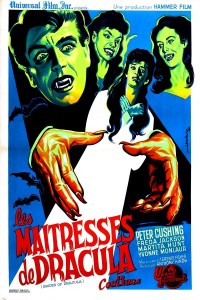 Instead the story revolves around Marianne (Yvonne Monlaur), a young schoolteacher on her way to her new job. She gets stopped in a small village and taken in for the night by the creepy Baroness Meinster. While staying at her castle, Marianne notices a man on the balcony across from hers, and when she investigates she finds that he’s chained to the stone pillar in the middle of his room. Now, if I came to someone’s home and I found a guy chained to a pillar, I might think it was for a good reason. That’s exactly why Marianne is in the movie and not me, though, and she quickly does her best thief routine and steals him the key. Of course, he’s a vampire and as soon as he’s loose, people start to turn up dead.

It’s no secret that The Brides of Dracula is a lesser film than its predecessor, but it’s still remarkably entertaining. The main problem is that the Baron (David Peel) just isn’t charismatic enough to stand up to Cushing’s Van Helsing, and the film ultimately suffers from this. Christopher Lee’s absence is definitely felt, but I still found the film much more fun that I probably should have. Perhaps it was the year-long wait, perhaps it was all the fun, secondary characters that populate the film, perhaps it was Van Helsing’s quiet determination to stake vampire hearts. Whatever it was, The Brides of Dracula was thoroughly entertaining.

As with all the other Hammer films I’ve seen, this one was directed by their main man, Terence Fisher. Once again he delivers a richly photographed, Gothic film that manages to exude a general feeling of unrest. His editing is superb, playing up the tension whenever possible. The problem is that for a good portion of the movie there’s very little tension. When shit does starts to go sour, and Van Helsing has to step up to the plate, Fisher also steps up and proves that he was merely waiting in the wings to strike when the opportunity presented itself. Like Chang Cheh at the Shaw Brothers, Fisher has to be near the top of excellent genre directors that get little to no respect from the mainstream.

The Brides of Dracula may not be a completely worthy follow-up to Hammer’s Dracula, but it is an entertaining film filled with a suave Van Helsing saving the day, and that counts for a lot in my book. I expected more female vampire action too, but unfortunately during the finale they just sorta stood there and watched as the Baron and Van Helsing went toe-to-toe. Anyway, I’d definitely recommend it to fans of classic films, and of Hammer horror. It’s fun and it’s really well shot; I can’t ask for much more than that.