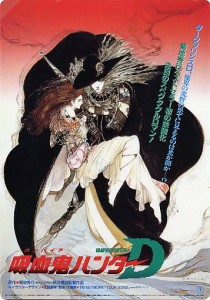 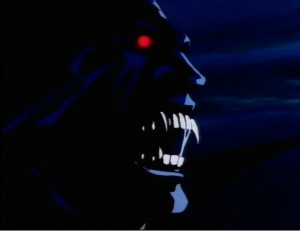 After this Doris sets out to find a vampire hunter before she is turned into a vampire herself. It dawned on me this time that there is a hint of wild west in the way D rides out of the sunset with his wide-brimmed hat and poncho to save the day. And the dog-eat-dog, post-apocalyptic wasteland setting is not all that far off from a desert filled with desperadoes.

The plot follows the same basic path as the novel, though there are quite a few omissions of detail and explanation as well as some tweaking to fit the story into the timeframe, some of which are pretty significant. This is hardly unexpected for a film adaptation, but I couldn’t help being disappointed in D’s encounter with the snake women. He comes out of it looking like an all-powerful badass in the film, but in the novel there was a level of deception and manipulation that actually made D seem even more badass. But I’m not here to compare the two versions; I’m here to tell you if this is a good movie. And it is. The only time the film’s lack of explanation truly hurts it is when D’s hand starts eating dirt and sucking in air. I’ll spare you the head scratching and just let you in on the secret: He was trying to gather the elements of air and earth in order to cast a spell. 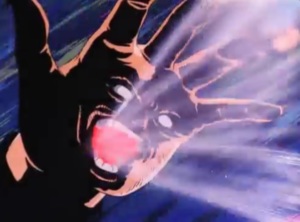 That’s right, D’s hand eats things. In fact it sucks with gale force winds to capture whatever it feels like eating at the moment. And while it doesn’t spew oceans of blood (which would be a pretty dumb move when fighting a vampire), it does tend to spew snide remarks on a regular basis in a high-pitched, scratchy voice that you might expect to ooze from a dark alley trying to lure children with candy. What I love best about the hand, though, is that there is no attempt to explain or hide it. In this aspect, I like the film better than the novel which played up the mystery of whatever the hell it is without ever explaining it. But the film is more straightforward. D just so happens to have a face in his hand. Deal with it.

The film is overflowing with freakish stuff like that. This isn’t the movie where you sit around wondering what lurks behind the corner or in the shadows. Those kinds of movies bore the crap out of me, and thankfully Vampire Hunter D shows you every nasty deformed monstrosity it can. Shambling horrors that might be the main attraction in another horror movie are commonplace here, and D swats them aside as minor irritations rather than real threats. 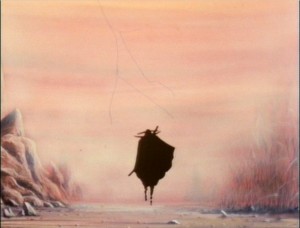 The animation isn’t quite up to the task of showing all the action, but the directing is. This film is a great example of where skill can overcome technical limitations. And besides, this was a direct-to-video release in the ’80s, and it lives up to the standards of the era. My only real complaint about the visuals is that some scenes were too dark to see. I had several moments where I had to resist the urge to turn up the brightness on my TV, but that may be as much to do with the quality of the DVD as the quality of the film.

While we’re talking about the visuals I should mention Yoshitaka Amano’s character designs. Amano is probably best known in the west as the illustrator for most of the Final Fantasy games. While the animation is based upon his artwork, most of his style and technique were lost in the transition. It’s not that the character designs are bad, it’s just that they lack his distinctive flavor, which is sad since his illustrations for the series are wonderful at evoking its dank and creepy atmosphere. 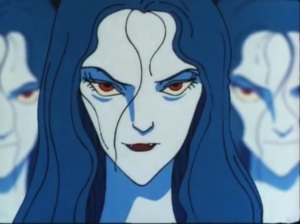 My biggest disappointment with the film, though, is right at the end. Magnus Lee is played up to be an unconquerable badass, and D is played up just as much. The final showdown between the two is filled with tension because you’ve seen just how unstoppable they both are, and their climactic battle is immensely gratifying. At least until it ends. Just when you’re really getting into it, it’s over. While it’s lots of fun, it finishes far too soon and left me wanting so much more.

But don’t let that dissuade you from checking it out. This is still a very well-made film with tons of dreary settings, a well-told plot, and some great monster slaying action that makes the most of what is has. It may have left me a bit unsatisfied, but I would rather be left wanting more from a film than wanting less. Vampire Hunter D is a great ride even if it isn’t flawless.