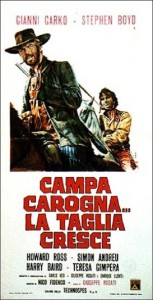 But the movie makes up for its lack of story with a lot of fun action. There are bandit ambushes, a gatling gun, a dynamite gun, an umbrella machine gun, a boomerang, you get the idea. Oh wait… an umbrella machine gun and a boomerang don’t sound like western weapons, now do they? That’s because Charge! is actually a spaghetti western comedy in disguise. Most of the time the film is serious and action-focused, but many of the scenes are informed by an absurd sense of humor. I hate spaghetti western comedies (or at least every one I’ve seen so far), but I actually laughed out loud at a couple of spots in Charge!, something that’s never happened before. Most of the time, Charge! manages to walk the line deftly and deliver fun mayhem and some good comedic relief.

Many of the scenes utilize both sides of the genre, such as a scene when the Army captain tortures a man’s wife in order to get information out of him. The scene begins with him ripping her shirt open to force the husband into talking, but instead he blubbers nonsense and spouts a clichéd “But they’ll kill me!” The wife then takes matters into her own hands, removing the remnants of her shirt and offering herself willingly to the big strong man before her, at the same time divulging every secret they wished to know from her husband. The Army captain refuses her advances but she ridiculously continues kissing and throwing herself at him, all the while Gianno Garko is sitting there reading the Koran and laughing wildly. This is one of the moments when the comedy doesn’t really work, but it gives you a good idea of how director Giuseppe Rosati sought to blend the two styles into one.

Rosati might not have succeeded 100% on that, but he does craft an enjoyable film regardless. There’s a ton of great camerawork here, especially with moving shots of men on horseback. One shot in particular comes right after the Army men have met Gianno Garko. As they ride off to the fort, the camera rides in front of them as they wind their way through the desert canyon. The film is clearly low-budget, and Rosati doesn’t seem to be an experienced director, but Charge! is quite handsome looking for what it is (bad print notwithstanding).

All this leads to an ending that contains more explosions than I could have ever hoped for. Even if our heroes are so bad at aiming that they mostly just explode big clouds of dirt and dust, they’re nonetheless exciting. The lead-up to it is rather good too, incorporating some of the tension of Leone’s westerns in a scene where one of the Army men ventures into the bandit’s camp alone to bargain with the bandits.

Gianno Garko and Stephen Boyd are pretty fun and charismatic in the lead hero roles, as is Simón Andreu as the main villain. The film tries to tell us that there’s a villain behind the villain, but that guy is more like Keenan Wynn with a Napoleon complex, and not really much of a villain. He’s just an over-the-top, dumb character, but I still found his scenes welcome as they broke up some of the boredom that was setting in with our somewhat boring main characters. Charge! isn’t anything special really, but it’s a rather fun and interesting movie for its use of both violence and comedy to tells its story.

And I rather enjoyed this line from Gianno Garko’s character:
“Allah protect us from these wise guys.”