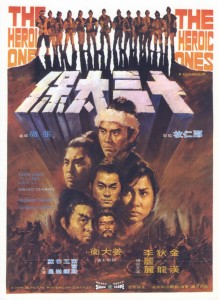 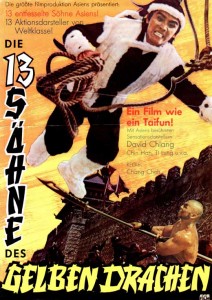 While this is an ensemble piece, and a “David Chiang & Ti Lung” picture, it’s actually much more heavy on David Chiang than it is a balance. He’s the cool guy brother that swoops in to kick ass, and he also leads the brothers on a raid of Chang’an in an attempt to kill the rebel leader. Ti Lung later gets his moment to shine, and by “moment” I mean nearly 20 minutes of nothing but action. This sequence is the clear action highlight of the film, offering up an escape scene that actually feels like an escape. Many times I find escape scenes too quick, too easy and too ridiculous. In The Heroic Ones we’re presented with four guys doing their best to battle their way out from the middle of an enemy compound teeming with hundreds of men, all while fighting off the effects of a night of hard drinking. Its length shows how much of a fight the enemy puts up against them, and it’s a joy to watch.

But before you start envisioning Ti Lung swinging around a sword, slicing and dicing his way through baddies as you’d see in most other Shaw Brothers films, instead imagine the iconic, ancient Chinese spear in his hand. This might not seem like a big deal, but as this was the first legitimate use of the weapon within the Shaw catalog, it comes with some weight. As I’ve written about ad nauseam, Chang Cheh was always looking for ways to improve his films as he grew tired of the genre tropes quickly. The swords of the traditional wuxia pictures are great, but there’s only so much you can do visually with a sword. The switch to spear-based fighting is a huge one, and brings a completely new feeling to the choreography. David Chiang also uses a heavy staff with a blade on each end, and as he deftly worked his way down the steps I couldn’t help but think of him as something of a Chinese Errol Flynn. Chang’s previous film, Vengeance!, introduced the modern era and knives to the martial arts film, and The Heroic Ones gives us spears and staffs as legitimate weapons in the genre. That’s pretty major, if you ask me, laying ground work for the entire genre to follow.

This is one of the major reasons why Chang Cheh is regarded as one of the genre’s greatest directors. When I started this series, I went in knowing this to be true, but I didn’t specifically know why other than, “His movies are awesome and bloody.” As I continue through the films chronologically, his contributions to the genre are many and earth-shaking; Chang Cheh is truly the genre’s shepherd. But even without the context of what Chang Cheh was doing here, I think the quality of the filmmaking in The Heroic Ones is far above and beyond the level at which most of the Shaw Brothers films are operating on. If you were to directly compare this film with any of the tired wuxia films (take the previous film Swordswomen Three, for example), even if you knew nothing about the filmmakers involved, it would be clear that The Heroic Ones was made by the Shaw Brothers’ A-team. The feel here is completely different, from a focus on location shooting, to the incredibly elaborate sets that give the film a much higher budget look than other Shaw films. 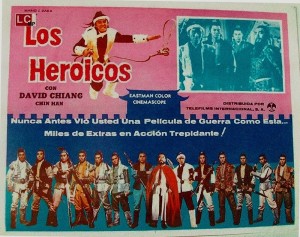 The Heroic Ones also reminds me in ways of Kurosawa’s Ran, with its dissent among brothers and large-scale war characterizing the entire film. While The Heroic Ones can’t match the budget or the intense realism of Ran, it’s definitely going for a similar, historical feel and The Heroic Ones can easily be seen as a precursor to Kurosawa’s film. Perhaps if Chang Cheh was making these types of movies in 1985, instead of Dancing Warrior, possibly the only movie to combine ballet, mime and kung fu, he could have delivered something similar to Ran. Anyway… Ku Feng’s dramatic portrayal of the king also reminds me at times of Tatsuya Nakadai’s performance as the aging king in Ran, which is to say that Ku Feng is absolutely phenomenal in this movie.

While other martial arts films of this era feel like variations on themes, with many similar scenes and characters, Chang Cheh consistently crafts films that defy these expectations and deliver quality entertainment. Where Shaw Brothers movies are generally always fun but clichéd, Chang Cheh’s films feel like movies that could have a life outside of a genre fan’s library; it’s a shame he doesn’t get the recognition he deserves from the mainstream. Credit must also be given to Ni Kuang, co-author of the script, for helping to bring together a story that delivers emotionally as well as it delivers action. That’s rare in martial arts films, but Chang Cheh and Ni Kuang consistently bring the goods.

While The Heroic Ones isn’t quite as good as the best Chang Cheh pictures, it’s pure entertainment and an absolute triumph for the director. And it has a moment where a guy with a sword stabbed through him catches a villain in mid-jump and stabs him with the sword that’s sticking out of his gut, all before hitting the ground. What’s not to like?

Next up in this chronological jaunt through the Shaw Brothers Martial Arts catalog is Griffin Yueh Feng’s A Taste of Cold Steel, but you’ll have to wait until November for that one! October is all horror, all the time! I am going to try to fit in some Shaw Brothers black magic movies if I can, though, so those should be fun.