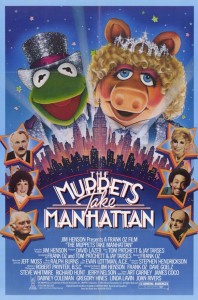 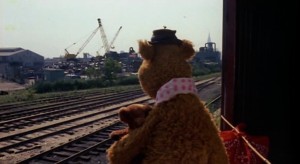 Where The Muppet Movie was about Kermit the dreamer, and The Great Muppet Caper was a fantasy of sorts, The Muppets Take Manhattan presents the cold, hard reality of failure. The Muppets who could once do anything they desired on film, are now told “No!” relentlessly as they try to get their joyous show on Broadway. This is the only film of the three that doesn’t acknowledge itself as a movie, and as such it presents a genuine story arc that the other films don’t have. Without that constant wink and a nod, The Muppets Take Manhattan is able to transcend being just another great Muppet movie, and is simply a great movie.

I realize that part of my love is nostalgia, but it’s also that finally after 20 years I’m able to appreciate this film that I always liked but never truly loved. The Muppets Take Manhattan also feels like it’s aimed at adults more than the prior two films. I was never able to completely comprehend everything going on as a child, and all that sadness really bummed me out. But this time around, it worked oppositely on me, as I saw it for what it was: classic screenwriting.

If you’d like to watch movies without knowing why they do the things they do, I suggest you skip to the next paragraph. After I learned this next factoid, I was unable to unlearn it, and now I’m cursed to recognize it in hundreds and hundreds of movies. Sometimes, such as in the case of The Muppets Take Manhattan, it increases my enjoyment because I feel that understanding the workings gives me a more fully realized appreciation of the payoff. In modern romantic comedies, though, it’s not so perfect and whenever the script reaches this point, I always do a big eye roll and say, “Number Nine.” So if you’re content with not knowing, please skip ahead. OK, for those still here: “Number Nine” refers to a point in the script where it feels like we’re building up to the climax, but then the rug is pulled out from under the characters and now they’re at a lower point than they’ve ever been. It’s the “Oh, how will we ever recover from this?” point, and if you’re following the general screenwriting formula for a 120 minute film, it comes around minute 90, or point #9 on your outline. At least, this was how I learned it. 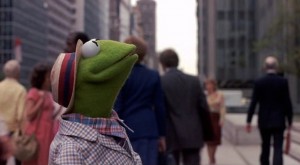 Technically, the film is just as impressive as the previous films, if not more. Henson’s ability to bring these characters to life in real-world situations is incredible, and I don’t know that I’ve seen anything like it before or since. Henson was truly a special guy, and I hope that the new films don’t end up overwhelming his greatness for the majority of the population that didn’t grow up with these original works. I’m sad to say that I think that’s the case, what with all the raves that The Muppets received, all the while being a far inferior film.

The Muppets Take Manhattan is a great addition to the pantheon of Muppet cinema, and I’m so glad to have re-watched it. The songs are catchy, and I loved them just as much as I did as a kid, even if they are kinda Broadway. At least it makes sense here, as the whole film revolves around the iconic street. It’s a sad one, though, and much more emotionally charged than either of the previous films, which may or may not be a good thing depending on the person/kid. But the sadness allows for some of the Muppets’ most inventive and imaginative moments, as the gang is split up for a good portion of the film. They keep up with Kermit by sending him letters and postcards, and we get to witness these hilarious adventures first-hand. And on top of all that, the finale of the film is a show within a show, reminding me in ways of the similar device in The Red Shoes, and this elevates the film’s emotional heart to such a high, that it validates all the time we spent down in the dumps with Kermit trying to get the show off the ground. I loved The Muppets Take Manhattan, and if you end up watching (or re-watching) it, I hope you do too.