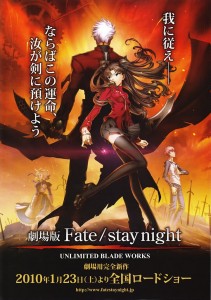 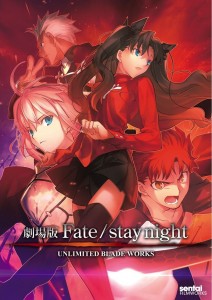 So what then makes this movie any good? Why, that amped-up blood and violence, of course! This film is wall-to-wall action. Crazy, over-the-top magical sword fight action. Exactly the kind of action I love best. I had been worried at the outset by the unwelcome similarity to Pokémon, and was envisioning a series of battles where the main characters sat around in an arena and gesticulated wildly while their pet monsters duked it out for them. Fortunately, Fate/Stay Night doesn’t go that route, and the magi themselves are usually willing to throw down with the best of them. Emiya himself spontaneously learns to create magical swords out of thin air and learns to use them like a total badass with just as little explanation.  No, it doesn’t make any sense, but adding some kick-ass action scenes is always a good thing in my book. Even better, the situation doesn’t stay with its original setup. Soon enough, Emiya loses his servant, and another servant flat-out betrays his magus, leaving the two stuck on the run without their most powerful weapons while everyone else wants them dead.

The rules regarding the contract between magus and servant are pretty vague. Sometimes the servants wantonly disregard orders, while at other times they are magically compelled to obey, no matter how much they try not to. I still have no idea what the Holy Grail was even supposed to do for anyone, either, and a subplot revolving around a red pendant made not even the slightest bit of sense. The film certainly could have done a better job of explaining what was happening. But considering how generic and recycled the setup and characters are, I don’t think I really wanted any more focus on the story. I’ll take a confusing, action-packed thrill ride over a tired, boring, but sensible story, thank you very much. Would it have made anything better to have a scene with Emiya learning all the rules and asking questions with wide-eyed wonder? No. I’m perfectly happy with having all that origin squeezed into the opening credits and quickly shoved aside to make room for the epic beat-downs to come. 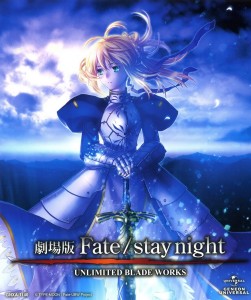 The film is full of great action scenes that end with someone getting impaled. Actually, that usually isn’t even the end of it. One of the characters gets impaled by a literal rain of swords, ending up with about a dozen of them protruding from his back, and he still keeps going. There’s even a lunatic ripping out somebody’s still-beating heart with his bare hands. It was such a fucked-up scene that even though I really didn’t care about the characters, I still felt shock and disbelief over that death. The only thing that really disappointed me was when one of the servants using a bow and arrow decided to put a sword to his bow instead. I immediately loved the idea of shooting an enormous sword from a bow, but sadly the sword magically shrunk down to become a regular arrow. So much for what could have been the most memorably awesome scene in the film.

Missed opportunities and problems with the story aside, I still had a blast watching this movie. My inner critic was noting all sorts of problems, but some older, more primal part of my mind took that critic and locked him in the basement of my brain where I couldn’t hear him. I mean, I’m almost at the end of my review and I still haven’t started bitching about the crappy CG. And you know what? I’m not going to. It was there, and it annoyed me, but it stayed mostly in the background where I managed to ignore it. Clearly my critic was thoroughly hogtied for that to happen.

Unlimited Blade Works gave me the experience I wish I had gotten from Expendables 2: an all-out assault of action that made me forget everything else. I’m not trying to rain on Stallone’s parade, because he did make a fun movie, but it didn’t unleash my inner Neanderthal the way Fate/Stay Night did. Maybe if JCVD had ripped somebody’s heart out…