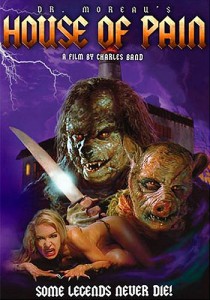 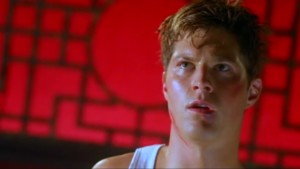 Anyway, Eric goes into the burlesque bar, orders a drink and watches Alliana (Lorielle New), a stripper that his brother spent a lot of time with before he disappeared. Eric tails her behind the club after she gets off work, where a gangster forces himself on her. My attention once again started wavering, but then Alliana punched the gangster in the face and her fist went clean through the back of his head! It’s like something out of Story of Ricky and it took me by complete surprise. OK, Dr. Moreau’s House of Pain, you have my full attention.

Unfortunately, nothing in the rest of the film equals this fantastic moment of gore, but Dr. Moreau’s House of Pain is still full of trashy delights. Full Moon, despite working primarily in the horror genre, doesn’t generally put much gore into their films; they have always been more slanted towards weird comedy than traditional horror. Dr. Moreau’s House of Pain bucks this trend, and if my memory of their films serves correctly, I’d say this is up there with Full Moon’s goriest movies.

The FX work was done by John Carl Buechler and his team at MMI. They regularly worked with Band during the Empire days, so I’m always excited to see them reunite in the 2000s (which isn’t often). Buechler’s presence means that the FX work is a cut above what I’ve come to expect from 2000s Full Moon films, too, which is a big plus. The creatures created by Dr. Moreau are the standouts, with the pig-faced hunchback making the top of my list. Gorgana, the patchwork girl with gills on her cheeks, was pretty damn good too. Good in a creepy, “What the fuck is that?” kinda way, which is exactly what you’d want in a film about surgically modified “manimals.” 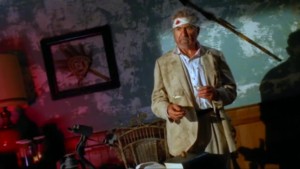 I’m surprised how positive this review is turning out, because I really had a hard time getting through the movie. It’s chock full of weird shit, it’s barely over an hour, but it’s still hard to follow at times and kinda boring. It’s kind of impressive how quickly you can become normalized to whatever craziness you’re watching and become bored, and in Dr. Moreau’s House of Pain that happens really fast. But if you detach from your traditional ideas of getting closure on plot points you thought were major (like Eric’s missing brother), and you just focus on squeezing as much fun as you can out of this wildly trashy film, it’s actually really watchable. It’s hard to explain, but after I woke myself up for the 5th or 6th time, and I rewound the film back to where I remembered dozing off, I steeled myself against its inherent ugliness and became determined to have fun. And have fun I did. Perception is reality, and if you go in with the right frame of mind Dr. Moreau’s House of Pain is a wild and strange trip that delivers lots of weird fun.

Next time I get around to a Full Moon movie, I’ll be going with the not-Full-Moon-but-still-related 1997 David DeCoteau film, Skeletons! See ya then!