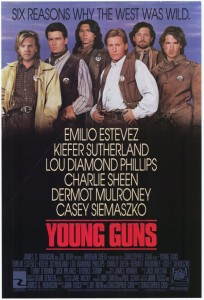 Young Guns acts like it’s some heavy, resonant shit, though, with a spoken narration over the closing moments to tell us what happened to the characters after the credits rolled. Perhaps in a different film I would have liked this touch, but in Young Guns it’s pointless. Lou Diamond Philips raps off names like they’re supposed to mean something, but as the film has virtually nothing in the way of character development I knew them all by their actor’s names. Of course, Billy the Kid is obvious, and Sutherland’s Doc is easy enough to remember, but everyone else is a total wash. 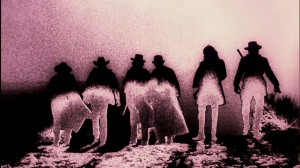 Many of the scenes make no sense to the overall film, and their placement in context to the scenes around them is equally baffling. Within the space of a couple of moments, we go from Billy the Kid coming out of a store, to Billy the Kid on the roof of the Regulator’s homestead shooting a bucket that Lou Diamond Philips is throwing knives into, to a nighttime dance scene. If this is supposed to be some sort of bonding montage, that’s fine, but there’s no music to tie it together and no flow in and out of any of the scenes.

Speaking of music, the score is pure ’80s synth cheese — aurally resembling a sitcom score — and I loved it. Problem is, it’s only in about two scenes of the movie. The rest of the film is nearly silent except for dialogue and sound effects. This is another baffling aspect as when the ’80s music kicks on, I am instantly engaged. There’s a moment late in the film when the Regulators have to escape some other cowboy dudes and the music thunders in so triumphantly I thought for sure we had hit a turning point. But then our old friend “Shitty Editing” comes back and we cut inexplicably from the chase to our boys around a campfire. Huh? What the fuck just happened, and why did the ’80s music stop?

The verdict is final, I hate Young Guns. I hope I don’t weaken later in life and decide to give it another chance. I do have to say that I enjoyed the gun battles, especially the final standoff that ends with everyone yelling in slow motion as they blast every last round of ammo at their opponents. It had me howling with laughter, and I was glad that it ended on such a high note, even if that high isn’t realistically all that high. Also look out for the extended acid trip scene to nowhere when everyone acts crazy and talks in slo-mo for a while as Kiefer Sutherland plaintively muses about the girl he’s obsessed with being a butterfly.

Whatever, man. Fuck this movie.