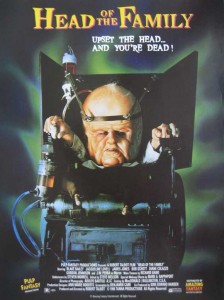 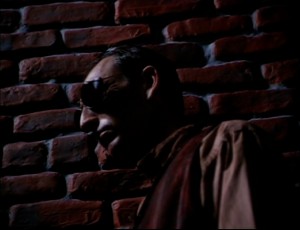 So yeah, immediately Head of the Family‘s story is about a hundred times more interesting than many of Full Moon’s other films. Or as Lance says when he discovers the roadblock, “This is some kind of weird bullshit.” While many Full Moon movies start out with good premises, this one actually has a level of quality to the writing that allows it to fully realize the story (at least to the budget’s potential). No, this isn’t Shakespeare, but it is a quality script from Benjamin Carr who usually does OK work for Full Moon. The film has something of a Hideous! vibe, but as that came out the year after this, I now know that this is the film where that film gets its mojo. The same could be said for Blood Dolls, which features a character with a shrunken head but a regular size body who was supposedly Myron’s son, but because they never made the sequel, Bride of the Head of the Family, the two films are seemingly unrelated except to stalwart Full Moon fans like myself.

Anyway, who’s this Myron I’ve mentioned above? Well, he’s the head of the family, and get this… he’s a giant head in a chair with little arms! He’s the HEAD of the family, har-dee-har! It’s so on the nose, but I absolutely love it. It helps that the FX work is superb, employing fantastic forced perspective camerawork, and a wonderful prosthetic mask for one of the better Full Moon actors, Michael Citriniti, to portray the family’s head. You’d never know it was him except for that thick, distinct voice of his, so I was happy to see him don the mask in the brief teaser for the unmade sequel that came on the DVD. 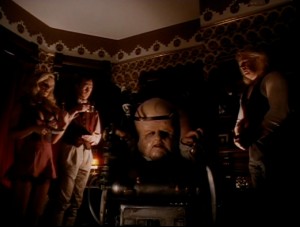 I can’t imagine why they never went through with producing the sequel. They clearly had already done FX work for it, which presumes that a script was written. Is it possible that it’s languishing at the back of the Full Moon warehouse awaiting some eventual DVD release when the company needs a quick injection of funds to produce their latest schlock? I sure hope so, and I hope that it comes out soon if that is the case. There’s a lot of potential sequel material to mine here, I’d say, even if Hideous! and Blood Dolls can be considered pseudo side-sequels. Perhaps the upcoming October release of The Evil Clergyman, one-third of Full Moon’s unreleased 1988 anthology film Pulsepounders, is a signal that other gems from the archive will soon see the light of day.

While a lot of the film’s success hinges on your enjoyment of the wild premise for the family, it is genuinely entertaining beyond that. It’s also one of Charles Band’s best directed features, with lots of great long takes that allow the actors to really bring their ‘A’ game to the set. And speaking of great acting, Jacqueline Lovell, generally known for her willingness to get nude and her resemblance to Scarlett Johansson (and in this film she keeps telling Lance to “call her Scarlet”… prophetic?), delivers a great performance as the quick-witted country girl Loretta. Sure, she’s showing skin in like 80% of her scenes, but she’s also allowed to show her acting talents as well, and she’s definitely got some.

Head of the Family is definitely not for everyone, but for Full Moon fans, it’s definitely one of the better films that you shouldn’t miss.

Next week on Full Moon Tuesday, I’m unsure what I’ll actually get. I’m trying to get Demonicus, a film from the director of Trancers 6, but I might actually end up with the Stuart Gordon-produced Deathbed (not to be confused with 1977’s Death Bed: The Bed That Eats). But even that is not concrete, so perhaps I’ll wind up with Slave Girls from Beyond Infinity! You’ll just have to come back to find out!