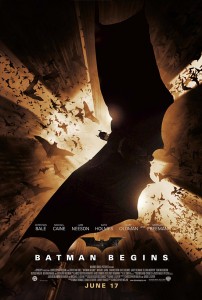 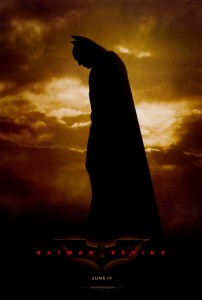 I won’t bore you with a plot synopsis, and I won’t belabor the fact that Christian Bale is an excellent choice for Batman. In fact, the entire cast is stunning, filled with so many incredible actors that apparently the first two times through I was completely oblivious to the fact that Rutger Hauer was heading up the board of directors at Wayne Enterprises. Hauer doesn’t get a lot of screen time, but what he does get proves he should be getting better roles in Hollywood these days. Perhaps Hauer isn’t integral enough to warrant an entire paragraph here, but as I’m sure his role got virtually no press while the others have all had their due, I felt it was necessary to give a great, mostly unsung actor a shout-out.

The first hour before we see Batman is incredibly well scripted, bringing together multiple timelines all at once to tell a cohesive story of how Bruce Wayne got to the point of creating the alter ego of Batman. Never before in any superhero film has a superhero felt so real. Of course the whole idea is something of an unbelievable premise, but if you’re questioning the believability of Batman while watching a Batman film, you should probably watch something else. Anyway, the first hour is similar in ways to Nolan’s Memento, in that it deftly manages its many timelines to tell one patchwork story. The storytelling in Memento is much tighter and focused of course, but so is the overall story.

Having one of the villains be a crime boss is another stroke of genius that helps to ground the film in reality. Not to mention that shooting the film in Chicago, and allowing Gotham City to still mostly resemble Chicago, grounds the film even more. As much as I love the questionable time-frame of the previous series, Chicago makes the perfect Gotham City as is. I visited Chicago in 2004, a full year and a half before this film came out and while walking around downtown at night I couldn’t get over the overwhelming sensation I had that it was Batman’s domain. As I looked up at the smoke billowing out of the skyscraper’s roofs, I knew he was up there watching over the city. When the film finally came out and I saw that they had used Chicago, it had all come full circle; seeing the incredible helicopter shot of Batman standing on the edge of a skyscraper reminds me instantly of those feelings I had, and for me, elevates the film even higher.

But all this realism is also counterpointed by some of the most comic book shit to ever appear in a Batman film. The Scarecrow’s plot for instance? Holy shit! No lie, I had a set of 3 Batman vs. the Joker View-Master reels that had nearly the same plot, minus the microwave emitter. I haven’t watched the extras on the disc, but can anyone confirm for me that Nolan mentions sourcing the View-Master reels specifically? Actually, don’t tell me, I just want to keep that dream alive for as long as I can. 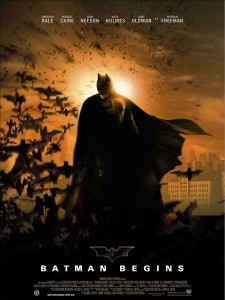 I also love the ending of the film. The monorail stuff is all exciting and thoroughly entertaining, but I’m speaking more specifically about the aftermath scenes. The destruction of Wayne Manor in the first movie is ballsy, and shows that nothing was held back. The carte blanche given to Nolan here is impressive on Warner Brothers’ part, and I pity the fool that has to follow in his footsteps. No one will be able to do justice to the work Nolan has put into the character, so I nominate Joel Schumacher to come back and give us a completely different take on his wild, neon Gotham, this time with a Nolan-influenced, realistic lean to it. I’m probably alone on that (and maybe I’m joking), but I just have one question for you naysayers: Why so serious?

One of the only faults I find with the film is Nolan’s filming of the hand-to-hand action. It’s all horribly shaky and much too close to everything for us to get a real sense of what’s going on. Some of this I can understand, as the intention in certain scenes is to make the Batman as mysterious to us as he is to the henchmen he drags away into the darkness. The flashes of fist and leg allow us to see Batman through their eyes, and I enjoy this fact, but in some scenes this logic just doesn’t hold true. I want to see some flow to the action, and it’s just not there. This led me to consider a Hong Kong-produced action film starring a true martial artist as Batman (perhaps Jet Li in his prime). While this could easily turn into a train wreck of a movie, that’s one train wreck I’d love to see… as if I don’t already see enough cinematic train wrecks around here (and I’m not talking about that dumb scene in Super 8).

Nolan must have felt like an absolute boss after watching the final cut of Batman Begins. It’s such a strong film, thanks in part to Nolan’s script, co-written with David S. Goyer. While that name might not be familiar with everyone (or perhaps it became familiar to some because of his work here), Goyer is a guy that started off very humbly with a script for the Van Damme film Death Warrant. That’s not a film you’d watch and spot greatness under the surface, and neither is Goyer’s work for Full Moon which includes Demonic Toys and Dollman vs. Demonic Toys. He later went on to do some quality work on Dark City, one of my personal favorite sci-fi films, before eventually finding his way to Batman. So the next time you see some shitty horror movie and you immediately think to ignore it as trash, some dude that got his start there might end up working on one of your favorite blockbusters in the future. Something to consider when so many immediately disregard low-budget filmmaking as worthless trash that should have never been made. Would we have Batman Begins without Demonic Toys? Maybe we would, who’s to say, but I like to think that one is dependent on the other.

Digressions aside, Batman Begins is a phenomenal movie. You knew that already, but it’s worth repeating. Nolan succeeds beautifully in crafting a film that manages to give us comic book thrills, realistic action and compelling characters. He also shows us Batman the inventor, Batman the investigator and Batman the avenger, instead of just Batman the one-note crime fighter as all previous films did. Batman Begins is an absolute triumph, and in my eyes, the best pure Batman movie of all time.