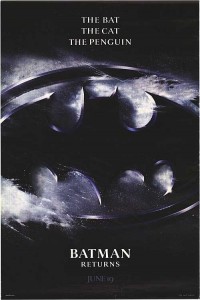 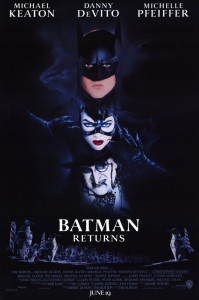 Batman Returns runs with the idea that everyone saw Batman and knows the character of Batman well. There’s nothing learned or explored with Batman in this film, as the filmmakers apparently thought, “He worked in the first film, let’s just leave him as is.” Which is fine, but give him something to do other than chime in for an action scene or kiss Michelle Pfeiffer. Instead nearly all the available runtime is devoted to building up the Gothic tragedy of Penguin. I have to wonder if Tim Burton was allowed more influence on this film than the first, as this storyline has his general feel all over it. There are some good moments sprinkled throughout, though, so I might recommend it to fans of Batman regardless of its shortcomings. I especially enjoyed the sequence when Penguin takes control of the Batmobile and drives it around via his mini-Batmobile kiddie ride, all while Batman flails about inside the real Batmobile hoping to rid the vehicle of the Penguin’s influence.

DeVito fits the Penguin as naturally as Nicholson fit the Joker, but his character is much too loud, obnoxious and annoying to be in the movie this much. DeVito is perfect, though, and it’s a shame that I have to end up hating a performance this good. I love the scene when Christopher Walken gives Penguin a fish and then takes him downstairs in his soiled undergarments to announce him as the new mayoral candidate. The fact that no one notices or mentions the fact that he’s fiendishly gnawing on a trout and walking around in his underwear is too damn absurd not to enjoy.

Catwoman is also grating and boring as a character. Her intro is nice, as is her transformation, but I just shook my head at nearly everything else. Of the main three, this only leaves Batman to hold down the fort, and as previously mentioned he’s given so little to do here that he couldn’t possibly make this film bearable. He has more gadgets in Batman Returns, but they don’t feel better than the ones he used in Batman, they feel worse. A fucking toy poodle catches his batarang mid-air for God’s sake. I know this a comedic moment where I’m supposed to laugh (and I did), but I should be laughing at the bad guy’s inept attempts to thwart Batman, not how lame his new electronic batarang is. It completely undermines Batman’s control of the situation and the film.

So as you can tell, I’m not much of a fan of Batman Returns. I think this will be my last time watching it, and if I ever talk about giving it another chance, please remind me not to.

Next up it’s Batman Forever, a film I hear nothing but shit about, but it’s one that I watched obsessively when it came out. I can’t wait to revisit it for the first time in at least 10 years.