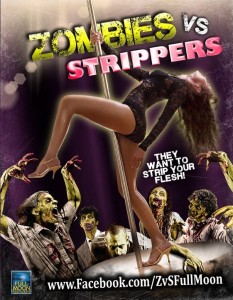 I say that the nudity is reserved, but don’t let that fool you, there is definitely a lot of nudity here compared to a mainstream film. Titties comprise the first image of the film, and an ass is the last, so that gives you an idea of the maturity level of the film if the obtuse, high-brow title misled you. There’s also a few stripping scenes, but none of them are rather “exciting” despite the fact that they do deliver what you probably rented the movie to see. I would argue that there are better ways to get your jollies, but if zombies + strippers sounds fun, I won’t argue with you.

Most of the movie is concerned with Spider’s moral dilemma of being in debt and wanting to sell the bar. It’s clichéd and boring, and unfortunate that it had to take up so much of the runtime. While Circus-Szalewski does a great job in the role, I wish that the writers had more of an idea than, “Hey what if we made a movie about zombies and strippers!” To be fair, I found this movie far more enjoyable than the Jenna Jameson-led Zombie Strippers, which goes the route of actually having zombie strippers dancing for the patrons. I can’t imagine there would actually be someone out there that would have a zombie fetish, but at this point I wouldn’t be surprised. In any case, Zombies vs. Strippers doesn’t do anything of that sort and instead keeps the interactions between the two factions strictly to battle.

I don’t mean “battle” in the Helm’s Deep, thousands of enemies, sort of way. No, it’s decidedly more small-scale stuff here and Vanilla, the black stripper, is definitely my favorite character. She’s a stereotypical, kick-ass action black chick in the mold of Pam Grier, but as a Pam Grier fan I didn’t mind. I simply enjoyed it when she ripped off her high-heel shoe and jammed it in a zombie’s eye. As much fun as Vanilla is at times, the first zombie raid on the club ranks as one of the most boring zombie scenes I’ve ever seen. I know they have a limited budget and can only do so much, but the filmmaking is so poor in this sequence that there’s literally no tension. Instead of Charles Band at the helm, this time we have Alex Nicolaou. If the last name sounds familiar, it’s because Alex’s father, Ted Nicolaou, was one of Full Moon’s most prolific and successful directors, bringing us the Subspecies series among others. While Alex clearly has a modicum of talent, it’s definitely not for action scenes. There are some excellent establishing shots of the city throughout the film, but most of it is comprised of poorly lit strip club scenes that are much too dark.

The trailer promises a film filled with gore, something a Full Moon movie almost never aspires to. The actuality of the movie is that the trailer contains almost all the gore. This was a big disappointment to me, but that’s what I get for buying into the advertising of a low-budget movie. There’s still some great moments, but I would highly recommend if you’re going to watch this, just watch it and ignore the trailer. Oh, and as I’m in the midst of watching the Scanners series, I have to mention the head explosion. As you can probably tell from the GIF I made, it’s a CG head explosion, but it proves to me that I will enjoy any type of head explosion regardless of CG as long as it’s still fun. I recognize this one as being rather shitty, but it gets the job done and I greatly enjoyed its inclusion in the film.

For a movie that’s only 67 minutes (not counting the seven and a half minutes of credit time), it’s a shame to call it boring. But it is what it is, boring and much too dialogue driven to be anything more than passing entertainment. I did enjoy it while I was watching, and a few moments had me howling with laughter, but most of it is rather insignificant and vapid. It’s not really depraved like Charles Band’s recent directorial output, but it is completely superfluous and empty. It definitely delivers both strippers and zombies, and the fight between them, but nothing that really meets my overzealous expectations.

Next time I’ll be checking out the latest Moonbeam title to hit Redbox, Shandar: the Shrunken City!