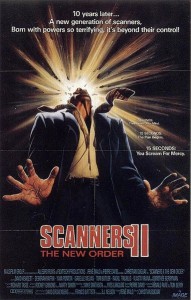 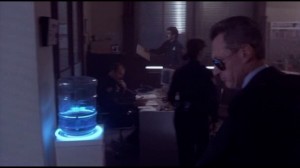 The story and a lot of the specific moments here echo Scanners, reusing and repurposing the more memorable facets of its story into generally less memorable moments. The scene when Cameron controls the yoga master’s heart rate in Scanners was a beast of a scene, but it’s turned here into a throwaway moment when David controls his dying father’s heartbeat long enough for medical care to save him. Some originality would be nice, but when dealing with a low-budget sequel that’s trying to capitalize on the cult status of the original ten years after its initial release, retreading familiar ideas is to be expected.

So as you can see from the animated gif, yes, there’s a head explosion in Scanners II. For some reason I doubted that they’d actually do it, and an early scene when David thwarts a convenience store robbery by exploding the criminal’s spine out the top of his head made me think that we wouldn’t get a full-on head explosion. We do, but like a good distinguished gentleman, director Christian Duguay reserves this moment until the final act of the film. The rousing, exciting, psychic-balls-to-the-psychic-walls final act of the film. Yep, the last twenty minutes of this shit are pure awesome, and it overrides any and all boring city political drama that inhabits a good majority of the rest of the film.

Let me share some of my notes from the point in the film when the shit really started to hit the fan:

“Like a lot of political struggle stories, I’m having a hard time keeping myself involved with the story. It’s too light on action and head explosions for me.

So yeah, instead of blowing their wad a few minutes into the film like Cronenberg did with Scanners, Duguay waits patiently and then unleashes a gnarly head explosion that signals the incredible finale to come. From this point forward in the film, it’s literally non-stop psychic thrills and it’s a joy to sit through. Not only is the action full of guns, gore and good times, it’s really well-shot. Duguay uses inventive camera angles and quick movements to indicate the psychic battle of wills playing out under the surface. Where Cronenberg merely showed the scanners contorting their faces like they hadn’t taken a shit in fifteen years, Duguay makes telepathy exciting and full of life.

Scanners is definitely a better made film than Scanners II, featuring a more auteur quality to the visuals, but Scanners II is a much more entertaining and enjoyable film for my money. The two films share a slow-paced feel, but Scanners II delivers so fully on its build up that it would be hard not to be entertained by its insanity. And Scanners II is capped off by two wonderful strokes of genius. After an impressive and frightening display of psychic power, the main character looks at the innocent bystanders that have witnessed him at his worst. He then says, “We mean you no harm.” Huh? Actions speak louder than words, buddy, and these people are scared out of their minds right now. We mean you no harm? It’s hilarious. But the pièce de résistance hits when the credits roll and a jammin’ rock song called Mind to Mind blasts out over the soundtrack. Screamin’ lead guitar licks punctuate just how fuckin’ awesome the ending of this movie was, and I couldn’t be smiling any bigger.