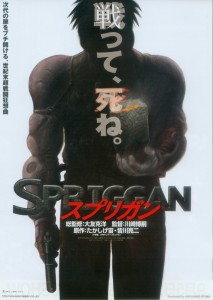 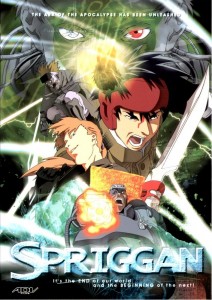 You can still see how much he delights in panning the camera around, but the static nature of two-dimensional artwork keeps him from doing so to excess. The camera bobs and weaves through the fights, but unlike the modern trend of shaking the camera around at random, Spriggan hones in on the action, keeping it center stage. It is a bit disorienting at times, but for the most part it gets the job done and keeps the action dynamic.

There are other aspects that keep the film entertaining too. The R rating helps it out tremendously. The blood and death saturating this film make it far more compelling than the kid-friendly warfare in Millennium Dragon. Spriggan is one hell of a trigger-happy movie, flinging gunfights at you almost non-stop. Barely five minutes go by without another adrenaline pumping action scene adding a few more bloody corpses to the pile. The film’s resident high school badass, Yu Ominae, lays into the villains with superhuman agility, bullets whizzing all around him. Don’t ask me how he manages to drive a jeep while standing in the back seat and firing a heavy machine gun. He’s just that awesome. His buddy Jean is no slouch either. Jean is the guy who knows that the best way to handle a hostage situation is to break out the bazooka. No one argues with a bazooka. 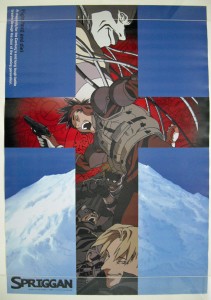 I haven’t gotten to the story yet because that’s really not what you watch Spriggan for. Sure there is one, but it’s really more of an excuse to have some cool action scenes going down. Yu is a spriggan, one of the top field agents for an organization called Arcam which exists to research and protect dangerous relics from ages long past. When they find the ruins of Noah’s Ark, a sinister military group wants it, and its possibly extra-terrestrial power, for themselves. There’s really not much plot to spoil. Everyone wants the Ark, and everyone is willing to kill to get it. Queue the next bloodbath.

The main villain of the piece is a little kid with psychic powers very reminiscent of the kids from Akira. There’s not much originality here. It’s a tale of kids being used as guinea pigs for military research, but without the depth to make anything out of it. All it does is justify the over-the-top action going on in the film. Our diminutive lunatic has rather pathetic maniacal laughter as well. Unfortunately Ryuji Aigase, the actor responsible for it, spent all his efforts making his voice sound like a boy, and lost all of his acting skill in the process.  The dialog itself never bugged me, but that halfhearted laughter broke the spell for me every time. The final showdown winds up rather disappointing because of its weak villain. In Akira, there’s also an epic showdown between a psychotic psychic and a normal guy, but in that film the battle plays out with a level of inventiveness and cleverness that Spriggan only wishes it could match.