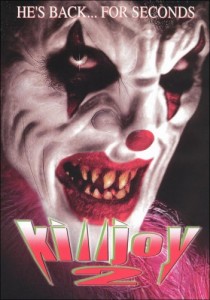 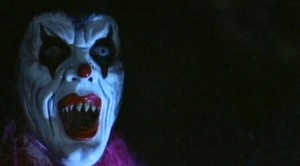 As I mentioned above, Killjoy 2 does not replicate or seek to continue the blaxploitation vibe set out in the original, and quickly settles into a traditional horror model where a group of bickering characters find themselves stuck in a bad situation. Killjoy 2 isn’t a good example of any horror tropes either, and its familiarity will only make it even more boring to those that can see the grease paint clown-writing on the wall. As the story line concerns black city folk stuck in the country, and the film’s subtitle is Deliverance from Evil, the last thing I expected to happen was that the group would eventually stumble upon a voodoo practitioner holed up in her backwoods house. It did make me laugh, though, and her warnings not to summon Killjoy are not heeded when one of the assholes forces the girl whose mother evidently taught her how to summon Killjoy to summon Killjoy, and here we find another issue with the film.

Killjoy was played by Angel Vargas is the original. I wrote about how much energy and feeling he brought to the role, and his wonderfully emotive lips became as much a part of the character as the wild afro or the clown makeup. Here, and in all future Killjoy films, he has been replaced by Trent Haaga. He does his best, but it just ain’t the same. Haaga isn’t nearly as charismatic or animated as Vargas was, and his lips just can’t hang. As a sidenote, Haaga got his start with Troma memorably playing the lead Diaper Mafia guy in Citizen Toxie: The Toxic Avenger IV, making this one of those rare occurrences when Troma and Full Moon histories collide. 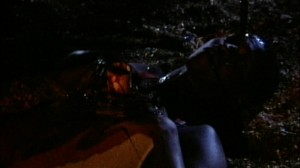 There’s also no Killjoy hallucination land in Killjoy 2, making this sequel more like a clown slasher movie than the supernatural gangland romp the first was. Stylistically, I could see some people preferring this over that, but there’s no denying that Killjoy 2 is a shitty movie. We don’t care about any of the characters, there’s no real story and even though it’s only seventy-two minutes, it’s a hard one to get through, let alone enjoy. The one saving grace is a few moments of good blood and gore, including one excellent kill when Killjoy impales a dude on a pipe with his supernatural magic hands.

But through all that bullshit, there is a slight ray of sunshine. Even though it’s low-budget and the ambient noise of roads, fans, or whatever else is close to the “set” is much too prominent, the film’s direction by Tammi Sutton is not too bad. There’s a surprising amount of quality shots and some genuinely well-edited moments that surpass the film’s otherwise threadbare production. Killjoy 2 is Sutton’s début as a director, and while it doesn’t feel like she’s overly talented, there is enough potential here to make me wonder what would be if she had more money and a quality script behind her.

Killjoy 2 is a boring piece of shit, but there are worse movies out there. This one is offensive in the crushing boredom it inspires and its inability to truly capture the essence of what made Killjoy awesome in the first film. I hope that the next one is a step up from here, but I will say that the boredom is remedied and rectified by the inclusion of an original, Killjoy 2 specific end title song! Co-written and performed by cast member Olimpia Fernandez, the Killjoy 2 end title song is a fuckin’ hoot! It features lines like “Don’t ever play with that old black magic/Cuz suddenly your life could end in one big tragic” that make all the boring nonsense that came before it worth watching.

Next time I’ll be checking out the latest installment, Killjoy 3: Killjoy’s Revenge!