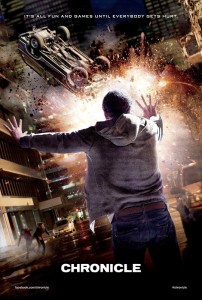 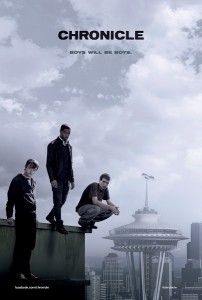 Chronicle‘s plot is beyond minuscule. It’s literally the bare minimum necessary to string a few scenes together. Most of the first hour or so consists of this repeating cycle:

And reset. There’s a real lack of character development as well; I literally didn’t know the one dude’s name until about an hour into the movie. They may have said it earlier, but it was obviously lost in a sea of insubstantial dialogue. Oh sure, they try to tack on a character arc in the final half hour, but it’s forced and ridiculous. That being said, the over-the-top insanity of the final act was infinitely more entertaining than the first hour, and it provided me with a number of big, unintentional moments of comedy. I have a thing for laughing at characters who are screaming, and boy does the end of Chronicle deliver a doozy of a screaming scene.

I took a shitload of notes while watching this one, but most of them pertained to my anger over the filmmakers choosing not to adhere to the found-footage ideal that they obviously wanted their film to be a part of at some point in the production. I especially enjoyed towards the end when the camera starts floating around artistically and is obviously not handheld. We’re supposed to believe that the guys are so powerful now that they’re controlling the camera with their minds while also getting ready for the day, but to me it just seemed like the filmmakers got lazy and wanted to try some cool overhead shots, even if the whole basis of their film’s aesthetic goes against doing that. I also find it hilarious that this movie has succeeded in making me argue for the traditional found-footage visual aesthetic, something that I almost unequivocally despise. Regardless of my personal feelings, I would like filmmakers to be consistent to the world they’ve set up, and sorry, I just can’t buy that a shitty Handycam from Best Buy delivers images like that. This is where my understanding and affection for the technicality of film gets the better of me.

I would have liked some back story on how the guys get their powers as well. There’s only the one scene towards the beginning, and it’s easily my favorite of the film even if it is incredibly vague and unsatisfying. I guess I don’t really need more explanation, but I would have like some science fiction idea to enrich the film and intellectually excite me. Overall, Chronicle is much too slow and boring to be fun, and I’m shocked at how well received this one was. Really? I guess I’m more out of touch with modern film sensibilities than I thought.