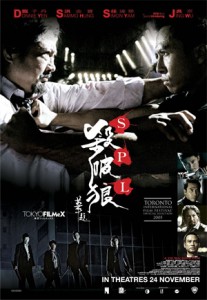 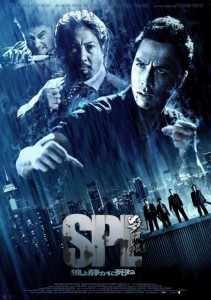 Like Flash Point, SPL is a crime drama before it is a martial arts film. Even though I should have known and expected this, the inclusion of Sammo Hung and Donnie Yen in one film led me to believe it was going to be balls-out martial arts. This is not the case. It reserves its fights until the end, save for a couple of quick bouts during the middle of the film, but both of those are over so quickly it’s not really fair to count them. When the true fights do come around though, they are pretty great. The fight between Donnie Yen and Jacky Wu Jing was incredible and easily the most memorable scene from the film. After this fight, I expected the battle with Sammo to be equally legendary, but alas most of that fight is the two combatants rolling around on the floor in various grapple holds. Don’t get me wrong, it’s a good fight and it has great choreography, but it left me wanting something different.

So as you may have guessed from the rolling around mentioned above, yes, this film also features MMA moves mixed into the choreography like Flash Point did. SPL came first though, and was also Donnie Yen’s first attempt to marry the two styles. As such, it comes off rougher and more akin to oil and water than the seamless integration seen in Flash Point. Still, it works well and adds a different texture to the fights than what traditional Hong Kong battles have. I hate to be the guy that can’t take change, but I would have preferred a traditional fight, though. It worked in Flash Point because of the smooth, but brutal takedowns; here it seems somewhat forced. But make no mistake, these guys move fast as fuck, so fast in fact that I think you’d have a hard time deconstructing the choreography even going frame-by-frame. Speed goes a long way, and the two main fights definitely deliver on the action promise.

But that’s also my problem with this movie. Sure, it’s something of a throwback to the analog days of Hong Kong filmmaking (and it definitely has something of that look and feel), but the film’s success lies solely on your dissatisfaction with then-current Hong Kong cinema. Going back to watch it for the first time now, it doesn’t hit in the same way as it would have. These guys have gone on to make better films, stuff like Ip Man, a movie that truly captures the greatness of Hong Kong fights and the modern ideal to make HK films more Western. I enjoyed SPL, but I can’t help but think that if it were made during the HK heyday, it would have been merely a sidenote.

If you’re a big Donnie Yen fan and you haven’t yet seen this, I’d definitely recommend it, but know going in that it’s more of a cops and robbers flick than a true martial arts film. It features a wildly over-the-top, melodramatic storyline to keep you entertained throughout, but it does get a bit tiring and clichéd before the fights begin in earnest. The writing is also at points nearly nonsensical, employing logic that even a small child would have a problem believing. On top of that, SPL also seeks to inject a lot of meaning by having the film set on Father’s Day, and most of the characters dealing with some father/child struggle. It’s interesting, and some of it hits rather well, but most of it is heavy-handed and meaningless. I liked the film, but I call it like I see it and I just can’t give SPL my full endorsement. It’s good, but there are much better films than this.