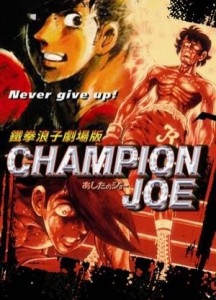 Joe is one of the most iconic and recognizable characters in all of anime. The series was so popular that when one of the characters died, a real funeral was held, with a Buddhist monk presiding and several hundred mourners attending. I’m no expert on funeral customs for fictional characters, but this is the only time I have ever heard of one.

Champion Joe is a tale of a young man’s rise in professional boxing, and as with any sports drama, it has its share of intense training sessions. It’s got improvised punching bags (a tipped over mattress, not a slab of beef), jogging (on dirt roads, you’re more likely to sprain something on pavement), and plenty of jump rope. This naturally invites comparison to Stallone’s iconic Rocky films. In fact, the comparison is so unavoidable that some western fans even refer to it as Rocky Joe.

But if you’re looking to tell which came first, this movie’s release date is highly deceptive. Sure, the film came out in 1980, but it is far more a creation of the 70s than the 80s. It is another in a long line of summary films, but this goes beyond retelling an old story. It is a compilation of edited scenes from the TV series which aired in the early seventies (which was itself an adaptation of the comic book from the late sixties). Sorry Rocky fans, but I’m afraid Joe came first. 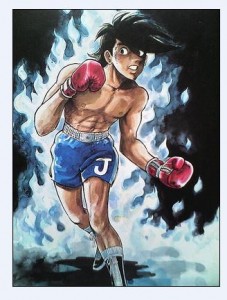 This shrinking of a larger story can be disastrous, but it wasn’t in this case. The characters felt fleshed out enough, and while there were certainly gaps in the plot, I never felt they were leaving out crucial information or character development. It clocks in at just over two and a half hours, and the ample time allowed them to cram in enough of the story to keep it coherent. That’s not to say there was no negative impact. Scene transitions especially felt forced, or completely nonexistent. Often events got cut off before you knew how they panned out, turning into a mild cliffhanger of sorts as you piece together what happened from the next scene’s conversations. It makes for a rather jerky pacing that lessens what is an otherwise compelling story.

As a product of the 70s, you can expect some rather low quality animation here. It’s watchable, but the action scenes could’ve used a lot of smoothing out. It certainly doesn’t match the more detailed animation of later eras. Rather than clean edges, it has a grainy, drawn by pencil feel to it. Shaded areas are often scribbles of black lines instead of a solid block of dark color. But I can’t rag on animation from a time when high quality was almost unheard of, and I actually like the grittiness to the artwork. It gives it a natural, handmade feel entirely absent from modern animation, and it perfectly matches Joe’s scrappy and unconventional personality.

Joe is a bit of a ruffian, and a rather large bit, at that. While he is generally kindhearted, rescuing a little girl from gangsters at the beginning of the film, he does so by beating the crap out of them. And when the cops show up, he doesn’t hesitate to treat them with the same vehemence. Joe tackles everything with an aggressive and lackadaisical attitude. He enjoys the fight too much to care who or what he is fighting, and his main reason for victory seems to be his absurd ability to take inhuman amounts of punishment and keep on going.

His skill is noticed by a washed up drunkard named Danpei who used to be in the boxing industry. It never explicitly mentions what he used to do, but Danpei sees potential in Joe and hopes to redeem his disgraced history and return to the industry as Joe’s trainer. Even once Joe is thrown in jail for pummeling an entire police squad unconscious, Danpei still sends him postcards with training instructions written on them, desperate for this last chance to change his fortunes.

In prison Jo meets a professional boxer named Rikiishi who was arrested after losing his temper and assaulting a fan who had accused him of playing rigged matches. The two become fast rivals during a stampede that involves a lot of pigs getting punched in the face. If you’ve ever wanted to see a boxer stuck in a pigsty vent his frustration on the poor animals, then boy, oh boy, I have just the film you’ve been waiting for. This hilariously ridiculous scene alone made the film worth watching.

All of Joe’s and Rikiishi’s matches in prison result in draws, however, and once they are released, they both start (or restart in Rikiishi’s case) their professional boxing careers. The inevitable showdown is the obvious climax of the film, but there’s a catch. Joe is several weight classes below Rikiishi, so the two can’t fight each other in the ring. That doesn’t matter to Rikiishi, though. He wants to settle the score so bad that he goes through a brutal diet until he is light enough to enter the ring in the same class as Joe. This makes for a rather odd showdown. Despite all the machismo and manliness that runs through the film, you wind up with a couple of scrawny guys duking it out in the end. They put on a hell of a fight, though. Blood sprays from their punches through an intense battle of wills. It may not look pretty, but it works well with what it has.

This may not be the best version, and it’s certainly not complete, but the movie still tells a good tale for anyone interested in knowing what Joe is about. Rocky fans will certainly get some entertainment from its quirky Japanese cousin, and anyone curious about anime history or Japanese pop culture should give this a look, as this is one of the most important anime series ever made.