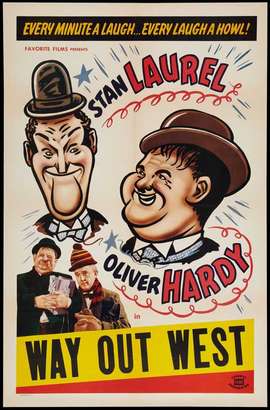 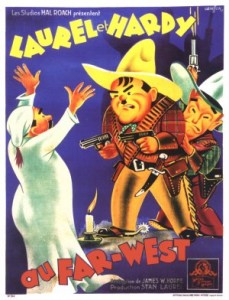 As an adult now, I noticed some things that I never saw as a child. Little things like even though this is a sound-era film, and uses the medium to its full advantage, there are tons of purely visual moments where Laurel and Hardy play off each other flawlessly. Their entire intro in the film, which runs a few minutes, is all played silently with the wonderful, Oscar-nominated music by Marvin Hatley punctuating the moments in time. Stan and Ollie both got their starts in silent films, and while they were both at their best during the sound era, it’s great to see them utilize everything at their disposal.

In addition to the expertly done score, there’s also a couple of songs throughout the film that add a distinct layer of charm largely unseen in modern films. How many movies nowadays would have a cute song and dance number as our heroes entered a saloon? Not many—and that’s a good thing—but it is quite nice here and I wouldn’t have it any other way. Did I mention that I love the music in this? Music may have never matched a movie as well as the music here; it’s easily one of my favorite comedy scores of all time!

The supporting performances are also excellent. James Finlayson has always been one of my favorite supporting actors of the period, and his comic timing and wild facial expressions continue to impress me. Not to mention that watching the film now I noticed the uncanny resemblance between Finlayson and Ben Kingsley as George Méliès in Hugo. Seriously, watch for it! Sharon Lynn also turns in a deviously funny performance as Finlayson’s wife, going to whatever lengths are necessary to rip the mine’s deed from the hands of our bungling duo.

There’s not much more I can say. Way Out West is probably the best Laurel and Hardy feature (although I still need to see a handful of them), and if you’ve never seen it you’re truly missing out on one of the best comedies the 1930s has to offer. It’s perfectly shot, perfectly edited, perfectly scripted & perfectly acted. It’s just perfect. I love it.