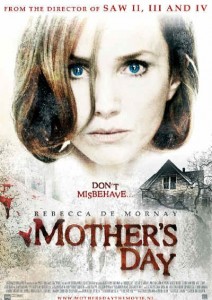 For those that have seen the original, and you’re wondering how it became a home invasion movie, well, see this nice suburban house where the wonderful people are partying with their disco tunes in the first few minutes of the movie? That’s the house of Mother and her boys, who lost it in the sea of foreclosures during the collapse of the American economy. See that, that’s social commentary, kids! It is also of note that the family has grown, now including a third brother and a little sister, and their victims are more plentiful as well, numbering about ten or so. The brothers are now average criminals who have just robbed a bank and need a place to patch up their third brother’s bullet wound. They go home, but oops, it’s not home anymore. Guess you shoulda called Mother more often. 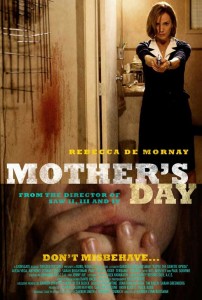 While watching this one, I could never shake the feeling of “What’s the point?” Under the surface, it’s just like any other hostage situation movie, albeit one with a gentle/harsh mother running the show. She scoops ice cream one moment, and orders up a hostage to fuck her dying son in the next. Instead of a family entrenched in their consumerist, backwoods mecca, they are a desperate family displaced by corporate greed and bad luck. They deal with this by resorting to bank robbery and a run for the Canadian border, but this changes the story from something creepy and disturbing into an overly violent crime film, whose only ties to horror are the thrilleresque tone & pace and a few gory moments.

I guess for me it’s more a situation of the 1980s Mother’s Day being a great example of that era’s horror film, and this one is also a fair example of this era’s, embodying everything I don’t like about the current state of the genre. It’s not necessarily a bad movie, but it is modern in its horror, and therefore I have a hard time being entertained by it. Am I supposed to enjoy watching these hostages squirm in terror? Are there three times as many characters just to give us shitty scenes of bickering about what they should do? Where the original film’s ending features a triumphant tone as the girls finally muster the strength to exact their revenge, the climax here feels like people who can only barely tolerate one another begrudgingly working together to fight a common evil. Remember that scene where they all partied together as friends? News flash: they all really hated each other and they’re going to choose this specific situation to act on all their frustrations about one another. They literally move to arguing immediately after the shitstorm begins, which is also immediate.

And don’t even get me started on the piece-of-shit ending. The first ending is well done for this tale, and leaves just a hint of ambiguity. Did she, didn’t she? Hmm. Then we get one final scene inserted and aimed directly at the audience that says, “Hey you! Remember that thing that we hinted at in the last scene? Here’s what we were getting at for those of you that have trouble with actually watching and comprehending a movie. Oh, and 2+2 is 4, by the way.” Ugh. I don’t generally watch a lot of mainstream movies (not that this is really mainstream—it barely got a theatrical release in the US), but do they generally end with such hand-holding bullshit?

On the filmmaking front, the film is definitely not an auteur’s masterwork. Far from it. It is a lot better made than I would have expected from a modern horror remake, but there is such an insane overuse of close-ups that it nearly negates any goodwill from other aspects of the production. This isn’t the first time I’ve railed on close-ups in modern film (and it won’t be the last) but goddamn, I think this is one of the worst I’ve seen in a while. The film was shot in a 2.35:1 widescreen ratio, but there’s absolutely no point to using such a wide field if you’re just going to fill it up with tight close-ups of snarling faces. After recently watching Sam Fuller’s House of Bamboo, a stunning example of how to use the ratio to its full potential, Mother’s Day rubbed me wrong even more than normal. Take one scene where one of the villains rips a victim’s toupee off and places it on his head. He says “Look at me!” but the shot is too close on his face to see anything but his face. Obviously it completely ruins the visual impact of him wearing the dude’s rug, and the line only draws attention to it. Moments like these make me question the pillars of humanity and scream to the sky, “WHAT THE FUCK?”

The film is also overlong, at nearly two hours. While most of that time is fast-paced and intense, it really wears down your ability to sit still when nearly the entire film is this group of “friends” being subjected to torture and fucked-up situations. On the other hand, if you are sadistic and enjoy the Saw films, you’ll probably also enjoy this one. It really is intense and features some good acting all around, especially Rebecca De Mornay, but for me it’s just not my thing. My only hope is that Troma gets a take of whatever money this movie manages to make, so that they can make Toxie V and any further films in the years to come. And hopefully, if it ever gets off the ground, the Toxic Avenger remake won’t be another loose retelling in the vein of Saw.