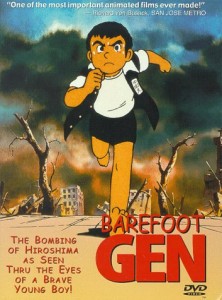 It may be a cliché to say, “one death is a tragedy; a million deaths is a statistic,” but any good storyteller knows that to tell a huge tragedy, you need to focus on the small stuff. And there aren’t many tragedies larger than the dropping of the atomic bomb. Barefoot Gen tells the story of Hiroshima and the hundreds of thousands of people killed by the first atomic bomb, and as with any good tragedy, the movie focuses on the small stuff. It deals with the statistics and the massive scale of destruction, but mostly it is the tale of a young boy named Gen and his family during the final days of World War II.

We expect to have the opening scenes showing the innocent lives soon to be lost, but this film does more than that. It shows great details of daily life in WWII era Japan, and really gets into the lives of Gen’s family. The strict rationing in effect during the war has left little food for them, and Gen’s mother is pregnant. She eats what little food they have, and even though it is for the unborn child, her guilt as she watches the rest of her family go hungry is a palpable object throughout the beginning of the film. Barefoot Gen is billed as a story about the atom bomb, and while this is true it doesn’t quite do the film justice. It grabs ahold of your guts long before it gets to the bomb. 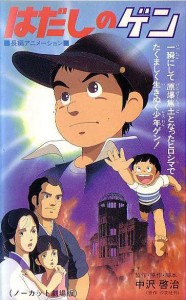 When the bomb does drop, it gives us an absolutely horrifying scene of destruction. Shots of people burning away come one after another in gruesome detail. Even after the initial blast, the injured and soon to die wander about the wasteland in agony and confusion. The dead and dying clog the streets and waterways. Gen wanders through a scene that looks ripped from a zombie horror film as he searches for his family amidst the wreckage.

I don’t want to spoil the plot here, but when he does find them, they are all in the same place, still conscious, and able to see and talk to him. It’s something of a contrivance, and other coincidences occur throughout the film. I also question some of the scientific accuracy of the bomb’s effects. But when it comes to smudging the laws of science and probability for the sake of dramatic effect I’m willing to forgive a bit of implausibility. It still does its job of portraying the pain and despair of that event, and does that job very well.

What doesn’t work so well for me is the almost slapstick moments sprinkled through the film. Any story of this much tragedy needs moments of levity to keep from overwhelming its audience. We do need time to catch our breath before diving in the deep end again, and the overall pacing of the film is excellent. But the tone of those silly moments can feel a bit off. It has a Saturday morning cartoon feel to it at times, at one point even resorting to the age-old gimmick of masking a fist fight in a cloud of dust with occasional arms and legs sticking out. Although, they never come close to ruining the film, those lighter moments occasionally felt a little too childish and ridiculous for a film with such mature themes at its core.

Within those lighter moments though, is perhaps the real point of the story. Throughout the film basic kindness and charity comes in the aftermath of violence and anger. Constantly, characters will act with rage, and then switch to generosity after realizing the situation. It’s a trait exhibited by nearly every character in the film, and happens so often that you can’t help but notice a trend. The movie shows a basic humanity underneath the suffering, and perhaps represents the entire war, which ended not in oppression, but in cooperation between the two nations. As tragic as the film is, it is never hopeless, and there is always some moment of joy to mitigate the trauma.

Many people will probably avoid this film because of its depressing subject matter and its disturbing portrayal of the victims of nuclear warfare, but for anyone who can take a severe tragedy, this is a powerful and worthy film. Its faults are ultimately minor and don’t interfere with the story or its impact. This is a must see for any fan of World War II drama, and also for fans not just of anime, but Japanese cinema in general. Don’t let its cartoony feel put you off. It’s an amazing and gripping tale from start to finish.