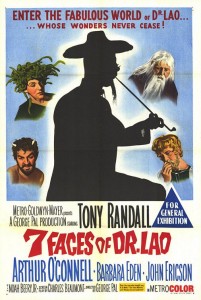 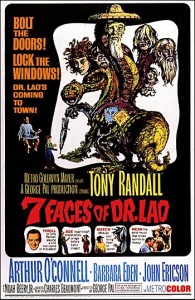 There’s a moral in this story, but I’m not quite sure how effective it is. I mean, how seriously can I take a film that tells us to be genuine to each other and truthful, all while depicting Dr. Lao as a highly exaggerated, racist caricature of a Chinese man. Maybe the moral isn’t as broad as I thought and it’s more like: Be fair to everyone except the ones with different skin colors. Dr. Lao never directly confronts racism and the film never strays into such deep social commentary, but any modern viewer will be unable to watch the film without thinking about it. This makes the film a perfect candidate for a remake, where an actual Chinese man such as Jackie Chan could play the mischievous and magical Dr. Lao, while also presenting something of truer depiction of a Chinese man. While it would probably end up featuring its own share of current stereotypes and bias, I think it would still make for a better film.

Besides the disturbing portrayal of Dr. Lao, the film does have a lot going for it. The special FX are particularly great, with all manner of effects on display for your enjoyment. Everything from puppets to animation, stop-motion and clever makeup work, it’s all featured here and they all pretty much look great for the time. Nowadays it’s all gonna look primitive and kitschy, but there’s a charm to it all. My favorite is the serpent puppet with Mr. Stark’s face, who is doubled in quick stop-motion sequences to perform actions, such as a wink, that the puppet would be completely incapable of performing. It’s pretty seamless and I can only imagine how magical it would have seemed if I had watched this as a child. 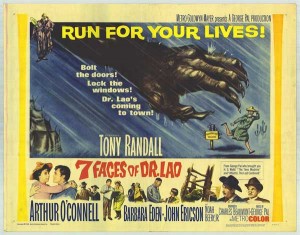 My favorite effect in the film though, is probably one of the most simple. Dr. Lao is going around town placing flyers for his circus on telephone poles. He takes the nails, places them in his mouth, and then spits them into the pole! You might think this was achieved with a clever cut, but as far as I can tell there isn’t a single cut at all! I even went through it frame by frame and I was completely unable to decipher how it was done. This little moment completely blew me away, and I’m sure it was one of the easiest FX to achieve, but for the life of me I just can’t figure it out. If nothing else, this facet of practical FX is where it will always triumph over the never mysterious CGI.

Pal directs the film with a confident camera that does nothing exceedingly special. In fact, the film looks very close to a 60s television show during the dialogue scenes, but when the magic begins, and the camera tricks take hold, they are wondrous to behold. Tony Randall does do a great job portraying all seven of Lao’s faces (including the female Medusa!) and truly transforms his body language and voice for each character. While watching the film I found his performance to remind me of Peter Sellers’s work with multiple characters on Dr. Strangelove, so I was not surprised to learn afterwards that Sellers was Pal’s first choice for the role. Randall does well though, and I think he fits the film better than Sellers would have.

I’ve heard lots of great things about this cult classic, but I can’t say that I really thought it was all that great. It’s fun, and it has its moments, but overall it’s fairly boring and I had a hard time getting over the racist depiction of Dr. Lao. I did enjoy the film though, and I’d definitely recommend it to anyone who wishes to see a different take on fantasy in film. A love, or at least an enjoyment, of 60s film will help greatly as it is rather dated and full of that flavor that only 60s filmmaking can deliver.