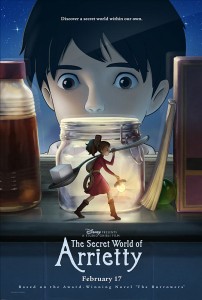 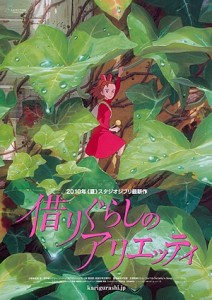 Arrietty’s adventures are great fun to watch.  We see lavishly detailed normal objects, magnified into wondrous new sights.  Cats and crows are fierce monsters, while ants skitter around Arrietty’s feet like underfoot puppies, and crickets chase her down to eat her flowers.  Earring hooks and rolls of tape are used to grapple up and down curtains and cabinets.  Water drops, tiny to humans, coalesce and bulge to the Borrowers, and even in scenes when Arrietty cries, the tears roll down her cheeks in huge globs.

In a lesser film, these things would have been boring, showing us nothing more than dull routine. Here all the little details become fascinating, and the most everyday items become new and filled with mysterious potential.  That is perhaps the greatest success of this film.  It gives a new perspective to the normal world, allowing us to marvel at things we see all the time.  A simple kitchen becomes a massive puzzle to solve, a cabinet is a sheer cliff, and the walls’ interior a labyrinth.  Arrietty’s adventurous nature permeates the film, and makes what could have been a dry and boring story feel rich and invigorating.  Despite little in the way of action, the film still manages to make even the most mundane events a challenge to overcome.

All of these events are animated with utter perfection, capturing fluid motion for the characters and vivid detail in the environments.  Just watching the events occur is mesmerizing.  I could go on about the animation, but really, it’s as perfect as you can get.  What more can I say?

I expected themes about theft to be more prominent, like a similar movie from my childhood, The Secret of Nimh. Instead, Arrietty focuses more on courage and persistence through difficulty.  The film remains upbeat and enthusiastic as the Borrowers try to avoid being caught by the humans and Shawn faces the limitations of his illness.  And here it deftly manages another difficult task: telling an uplifting story without being sappy.

There are some odd moments of the plot that felt a little unfulfilled, especially regarding the dollhouse, but they are tiny problems in a sea of great moments.  The film worked on all levels, despite a very sedate pace.  Ultimately it entertained from start to finish, and kept me rooting for the characters the whole way through. That’s quite an accomplishment for something aimed entirely at children.