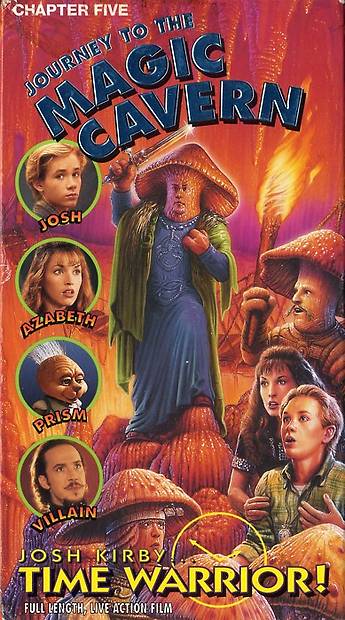 So what’s good about this one? The mushrooms! The makeup on these guys is fantastic and pretty much seamless. They do look a little phallic, but I’m unsure that it’s possible to create a human-size mushroom that doesn’t. In any case, the headpiece is perfectly matched with facial makeup so that on many of the mushrooms you can’t tell where the human’s face ends and the appliance begins. Others have a ring around their face that makes it apparent, but even on these characters the ring itself looks like it’s part of the mushroom’s distinct texture and not just a face hole. Each mushroom character is named after an actual mushroom and their voice reflects the accent you’d expect that specific mushroom to have. For instance, Porcini has a thick Italian accent and even sings O Sole Mio at one point. Subtle Josh Kirby is not, sayeth a wise sage on Dagobah.

I also really enjoyed one of the small moments that comes towards the end of the film. After our heroes have met up with a Southern man running a sideshow underground (don’t ask), Josh Kirby mentions the United States and is quickly corrected by the man that it’s now the United Federation of Colonies. The Southern man (whose accent fades in and out in varying degrees of Southern gentleman) asks him what time machine he stepped out of and then says, “Next thing you’re gonna tell me is that you’ve never heard of the talking ape era of the 21st century!” I take it as a subtle reference to Planet of the Apes and I love that the filmmakers threw this in there. The worlds of Josh Kirby are wild and very one-note, so the world of the Apes films fits that bill to the letter. I have a soft spot for fictional worlds that intersect, so even though this was a non-moment, it’s one of my favorites from the film. It also answers the question of whether this underground film is set in the future or the past, as they never outright say which way in time they go. Now knowing that it’s the future, I have to imagine there was a giant nuclear war which created this race of giant mushroom people, but such questions will never truly be answered.

Josh Kirby… Time Warrior: Chapter 5, Journey to the Magic Cavern isn’t as fun as it should be (or it thinks it is) but it is a definite improvement over the last two entries. I may have enjoyed these as a kid because of their wacky combinations of fantasy worlds and average teenagers, but as an adult they show their faults more than they show entertainment. The film is also shot in the most basic way possible without any spirit or life in the camera, and this is probably one of the biggest missteps the series makes. With a script as bloated and boring as these films have, they need some inventive spirit to liven up the material. They also feel more like three half-hour TV episodes strung together than an actual movie. If it had been produced in more bite-size increments like this, these films would be a lot easier to get through, because at ninety-minutes each they’re a chore.

Here’s the opening… IF YOU DARE!

Next week, my sanity is in sight! I’ll finally come to the end of the Josh Kirby tunnel with the last film in the series, Josh Kirby… Time Warrior: Chapter 6, Last Battle for the Universe!