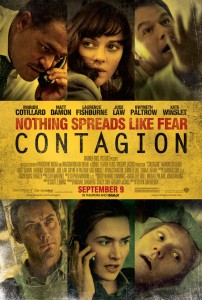 It’s an ensemble, so if nothing else the acting should be good. It is, and literally everyone in the film turns in a great performance. My girlfriend had an issue with Anna Jacoby-Heron, the girl who played Matt Damon’s daughter, and I somewhat agree in regards to the early scene she commented on, but as the film progressed she did better and represented a high school kid pretty well. It’s her first movie too, so that explains some of the questionable line delivery. Anyway, in a film like this it’s hard to single out any one outstanding performance because the film really succeeds on the strength of the overall unit, but I gotta give some props to Matt Damon, Laurence Fishburne and Kate Winslet. They all did extremely well selling their individual positions and created memorable, believable characters. Everyone else did too, but these three really stood out from the crowd.

Beyond that, what impressed me about Contagion is Soderbergh’s absolute control and confidence in slowly dispensing the data about the disease and its global spread, skillfully managing the multiple ongoing storylines with apparent ease. That’s no small feat, and Soderbergh makes it look like child’s play. In addition to masterful editing between the characters, the film is also visually interesting and exceedingly well-shot. A procedural about an epidemic has no business looking as stunning as Contagion does, but holy shit does it look great. Soderbergh has always had an eye for clever visuals, even in the most mundane of settings, and he really outdoes himself here. Each and every shot looks perfectly composed, while still retaining the in-the-moment feel of a camera crew on assignment. There’s a sense of urgency and purpose in every shot that speaks volumes. And it’s a truly global film. When it says Hong Kong, it’s actually Hong Kong! This adds yet another layer of realism, selling the intensity of the social impact and the spread of the virus in ways that no studio backlot could have.

I also have to mention that the score is fucking phenomenal. It fits the film like a tailored glove, as well as working perfectly as ambient writing music. I’ve always heralded Jon Brion’s Magnolia score as one of the best scores to write to, but Cliff Martinez’s work on Contagion is definitely giving it a run for its game show money. Fuck the Oscars and their bullshit nominations for Best Original Score. Contagion, Attack the Block and The Skin I Live In could all get together and collectively take out each and every one of the nominees without even breaking a sweat.

Contagion is one of the best films of 2011 and should have secured a Best Picture nomination with ease. Unfortunately it did not as Hollywood seems to be once again enamored with congratulating itself for all the wonderful things it did over the years and nominating such pandering films as The Artist or The Help. Oh wait, they’re always like that. Contagion is slow-paced and could easily be seen as boring to certain people, but for me it remains one of the most enthralling and interesting movies of the year. If you’ve ever been curious how a large-scale viral epidemic would go down, Contagion is the film for you. Highly recommended.