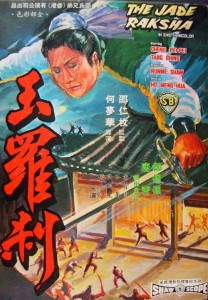 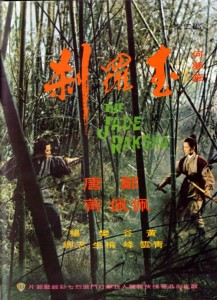 Prior to starting this series, I never knew Ho Meng-Hua as a martial arts director. What I always associated him with were his forays into horror and the supernatural such as the Black Magic films and The Mighty Peking Man. He’s a respectable martial arts filmmaker as well, but it’s clear by watching his films that he has a completely different take on the genre than other well-known directors like Chang Cheh or Lo Wei. Ho Meng-Hua always injects some element of the supernatural into the proceedings and the misty, moonlit opening of The Jade Raksha foreshadows his varied future career in the horror genre. Also as expected there’s a couple of really great supernatural moments that other directors would balk at and refuse to do. Ho Meng instead goes right for it, and while over-the-top moments such as Cheng Pei-Pei chopping down a bamboo tree and then pole vaulting over a gorge’s burned-out bridge may put off some viewers, it’s times like these for me when Ho Meng-Hua’s films, and the Shaw Brothers, truly shine. There’s also one fight scene that heavily features the combatants jumping onto and fighting on bamboo branches, foreshadowing its use in more well-known films such as Crouching Tiger, Hidden Dragon.

Ho Meng-Hua’s camerawork is confident and beautiful, perfectly capturing the varied moods the scenes require, from haunting horror to luscious romantic moments more akin to a Hollywood Western than a Hong Kong martial arts film. I also continue to be highly impressed with his ability to cut on action and make it look seamless. The technique is used to simulate thrown weapons in virtually every Shaw Brothers film from this era, but no one sells it like Ho Meng-Hua. When I can pause the movie and advance it frame-by-frame and only barely detect the cut, my only response is to laugh in honor of the amazing work on display. It’s such a simple technique, one of the oldest in the book, but I don’t think there’s anyone who made it as seamless as Ho Meng-Hua.

I found the acting to be especially good from the cast, with Cheng Pei-Pei, Tang Ching and Ku Feng turning in the best performances of the film. Neither Cheng and Tang overshadows the other, instead they both carry the film equally. Both of their tales are interesting and engaging, so the film’s back-and-forth nature between the protagonists helps to keep it flowing well. Ku Feng is also particularly good as a blind beggar; I guess there’s a reason why he’s been in 347 movies!

As I mentioned above, the fights are nothing to write home about (or write a review about). There are some great shots sprinkled throughout them though, so this keeps them from getting too stale. Ho Meng-Hua uses long takes to shoot many of the fight scenes, allowing the viewer to take in the entirety of the conflict in one big helping. It’s not as exciting as a well-edited piece would be, but the horizontal camera movement through falling henchmen and a sword-swinging Cheng Pei-Pei makes it all the more interesting. There’s also quite a few wonderful overhead shots of the fights, including one of the famous Shaw Brother’s outdoor corridors at night. The combatants run down the walkways with torches lighting their way; the camera high overhead capturing their movement like blood cells traveling through concrete veins.

The finale is like something ripped straight out of a James Bond film, with the hero in peril on traps that would make Hsu Cheng Hung proud and the villain spilling all the beans. These are good, revenge-laden beans though, so I will forgive the obvious cliches. The Jade Raksha even ups the ante another notch by actually utilizing some James Bond stingers to great effect, and by James Bond stingers I mean actual musical cues from the James Bond soundtrack, not music in the style of. Good ole Hong Kong. The Jade Raksha is exciting and quite enjoyable, but there just isn’t enough to elevate it to truly great (or perhaps even memorable) levels. It remains a fun, well-made revenge film, nothing more, nothing less. And really, is there anything wrong with that?