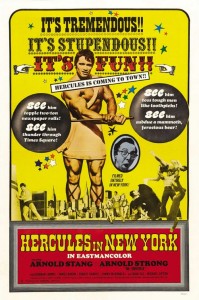 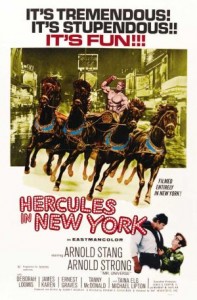 Oh, but goddamn is this movie shit! It’s painfully slow, with the scenes set in Mt. Olympus being the worst of all. Perhaps this was due to the general lack of Arnold in these scenes, but it’s probably more due to the horrid acting and the meaningless, lengthy dialogue. At least Zeus was waving around a rebar lightning bolt more often than not, and that gave me a modicum of fun.

I’ve never seen this one all the way through before and over the years I’ve heard many things about how this was one of the worst movies ever and all kinds of bullshit hyperbole. No matter how bad it is, it’s a far cry from the worst ever. Just the mere presence of Arnold raises it up, but I must remember that I speak from the future with the miracle of actually hearing Arnold’s thick, sometimes undecipherable accent at my disposal. I honestly can’t imagine watching the film without it, and perhaps if I had I would agree with the worst ever statements.

I don’t think the film’s sense of humor is purely unintentional either; it’s clear in many scenes that they’re going directly at the humor. Sometimes it works, most of the time it doesn’t, but it’s still an absolute must watch for the die-hard Arnold fan, if for nothing else than to see him body slam a dude in a bear suit. And stick around for the closing moments as Arnold’s buddy reminisces about his time with Herc and you get to see some great alternate footage of the bear fight.

The film also features a couple of great lines not spoken by Arnold. The first is from the opening moments as the camera flies through the clouds on its way to the home of the Gods. The narrator tells us that we will be hearing a story from a time “when myth and history merged into mystery.” Whatever the fuck that means, but I love the wordplay. The second comes later in the film, during some scene where Arnold was elsewhere (and therefore I kinda zoned out). A man who Arnold previously picked up and twirled around (during Hercules vs. the Intellectual Socialites) speaks to the girl Hercules has been courting and has this to say about our favorite demigod, “I like him even if he did crack two of my ribs.” Despite the inherent humor in the line, it is an accurate description of the film. Despite Hercules in New York‘s insistence on being a fucking awful film, I still kinda like it.