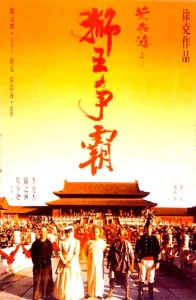 Unfortunately though, that main struggle isn’t the wonderful one-on-one fight that you might be expecting. In fact, there’s very little of that in OUATIC3, as the action focus is on big spectacle and having lots of performers on-screen at once. While these scenes are enjoyable to watch, it’s the small moments within them between two fighters that are the most impressive. It’s a shame these are only seen in flashes and brief glimpses though, because as stated before, the film is almost entirely focused on spectacle. 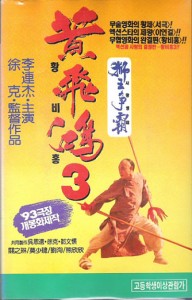 OUATIC3 is the lightest of the three films (I know there are more, but those are separate and shouldn’t be considered alongside the original three), and is arguably the quickest moving. The first two films are like action dramas with Wong Fei-Hung skillfully woven into the fabric of heavy historical backstories. OUATIC3 is much funnier and light-hearted than the previous films, while still retaining just a bit of that serious tone which characterizes the series up to this point. As such, OUATIC3 can never be as impactful or rewarding as the first two, but despite this it remains intensely watchable and very entertaining overall. It’s just that the specific moments of the film aren’t especially memorable. Hundreds of lions dancing up a tower is a grand feat and cool to look at, but there aren’t many details that resonate after the film is over. If you ask me, “What’s the first thing that comes to mind when I say Once Upon a Time in China?” I’d respond with a multitude of iconic moments from the first film. “How about the second film?” Again, a ton of great moments that stick with me, but with this one I’d respond, “Lots of lion dancing.” And unfortunately, because of the spectacle aspect, it’s not even that memorable of lion dancing! For me the gold standard of lion dance scenes is Jackie Chan’s The Young Master, and OUATIC3 is a muddled, sensory overload in comparison.

Jet Li is still amazing though, regardless of the faults of this film. He is truly a gift to any choreographer that gets the chance to work with him, as he seems able to pull off any movement required and make it look beautiful, smooth and flawless. You just have to respect and honor anyone that has such absolute control over their body. I realize that he has a lot of wires assisting him here, but without a distinct control and understanding of the movements of the human body, no amount of wires and skilled stuntmen could help you become as great as Jet Li. But again, due to the spectacle, Li doesn’t ever get a chance to just let loose and show us everything he’s capable of. One aspect of the fights I did enjoy was how Wong Fei-Hung used many cloths as weapons throughout the movie, and I like to imagine that this was a direct result of seeing its effectiveness at the hands of Donnie Yen in OUATIC2.

Xiong Xin-Xin as Clubfoot is easily my favorite character of this film, and a big reason I enjoy this one as much as I did. He exhibits a similar understanding of movement and grace like Jet Li, showing off two distinct styles of kung fu in the film. First his wild, animalistic, villain style and later on a more restrained, traditional style. His character arc that facilitates this change is a fantastic sub-plot as well, giving the film something special that the main plot is definitely lacking.

The Westerners are always viewed through the lens of a Chinese Nationalist in these films and the Russians here are no different. I find it interesting specifically that the Western machinery he brings into China (and Wong Fei-Hung & 13th Aunt’s life), is also his downfall. In a film built upon the precept that ancient Chinese martial arts are inherently more powerful than foreigners might know (they didn’t always have kung fu movies, y’know), it’s almost obvious that the Westerner’s embrace of the Industrial Revolution and new technology will prove to be an integral part in their demise, but it still surprised me and I thought it was incorporated very well into the plot.

Tsui Hark once again directs a very well put together film, with wonderful swooping camera and the many odd angles I’ve come to expect from him. The cinematography shows a great balance of color and shadow, even if the contents of the image are a bit overloaded with hundreds of lions dancing at once, a casualty of the plot and not really the cinematographer’s fault. The choreography itself is also very well done, but I would have rather had a more traditional one-on-one fight featuring Jet Li somewhere in the film. Clubfoot and Wong Kie-Ying have a pretty impressive fight early on, and Jet Li does a great job in the oil-slicked floor fight, but neither of these are up to par with any of the previous film’s triumphs.

Once Upon a Time in China III is a good movie, full of laughs and high on action and excitement. It’s very entertaining despite its myriad flaws and I think anyone who enjoyed the first two won’t regret watching this one. Seeing the fulfillment of the romance between Wong Fei-Hung and 13th Aunt is also very gratifying, as they’ve been playfully dancing around it the entire series. It’s definitely a different style of story and the fights aren’t nearly as iconic, but it’s worth watching for martial arts film fans.

Now hopefully it doesn’t take me another fifteen months to review Once Upon a Time in China IV, a film I have never seen!