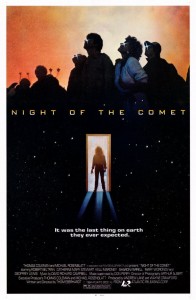 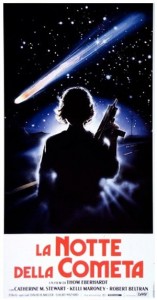 Sounds pretty good, right? The problem at this point in the film is that now I’m ready and willing to watch an awesome, apocalyptic zombie movie, even one with a PG-13 rating. Instead of going this more obvious direction, the film never really becomes that zombie movie. For this reason alone it is an impressive film and one that stands out from the rest, I just can’t help but lament the fact that the potential for a kick-ass ’80s zombie movie just slipped through my grasp. I can’t harp on my dashed expectations for the rest of the review, though.

With a film as varied as this one, there’s a lot more to be thankful for than to regret. The acting from Catherine Mary Stewart and Kelli Maroney is above par and together they really hold the movie together. For all the tonal shifts in this movie, they both handle each one with ease, skillfully transitioning into each new mood without a hitch. The other actors do a good job as well (except those thugs in the mall, they were pretty awful), but none of them are especially memorable.

Night of the Comet does have its share of problems, though. Every one of them can be explained away with, “It’s an ’80s movie,” but for the sake of discussion I’ll take that excuse off the table (not that I think that’s an invalid excuse). My biggest question is this: are there really only less than 10 survivors in the greater Los Angeles area? I can understand only showing so many people due to the budget, but director Thom Eberhart kind of makes it a point to show us multiple cityscapes completely devoid of people AND zombies. Most people are dust, I get it, but I know there were more people inside sleeping who didn’t give two shits about a comet’s return flyby. The film wouldn’t have the same feel if those solitary city shots were filled with survivors or zombies, I’m just making a point that the film should have done more to confine itself to a localized area so questions like this couldn’t have the opportunity to come up.

Secondly, there’s a later plot point involving Kelli Maroney’s character staying behind when her sister continues on. Neither of them question this or fight the fact that they are being separated, and I think if I was trying to survive the newly formed post-apocalyptic wasteland with my sibling, I’d do what I could to stay with them. Is there really only one available helicopter seat? It feels incredibly contrived and done to allow the rousing climax to play out as it does. Of course the audience is along for the ride with Catherine Mary Stewart’s character, but I feel that this payoff doesn’t rub away the burn of contrived plot points.

You may ask why I’m being so critical and hard on these specific aspects of the movie? It’s simple. It’s because I feel that overall the film is a good one, a truly different, under-the-radar film (a forgotten flick, if you will), and it could have easily been a great one. Films that show incredible promise but squander some of that good will bother and frustrate me more than truly bad ones, and I therefore come across as more negative on these films that I like than I ones I am truly indifferent to. Night of the Comet is a good ’80s film and if you like such things, you’ll most likely have a good time with it. It’s not quite everything it could be, but it still remains entertaining and totally worth watching despite these nagging issues.