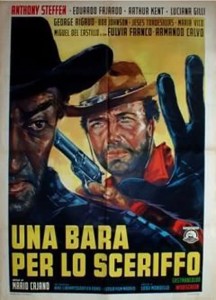 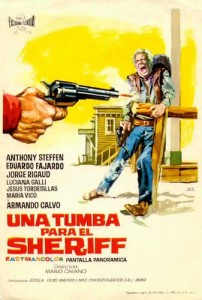 My favorite scene in the film is a toss-up between his gang initiation sequence and the finale. In the first, Shenandoah tensely stalks another of the bandits through the rocky terrain of Spain while the plaintive guitar of Francesco De Masi’s score sets the tone. It’s pretty much without dialogue and a great display of visual filmmaking as he hides in the rocks and sets up clever ruses for the all-too-stupid bandit to fall for. The finale is equally satisfying with a big shootout at the bandit’s camp which leads into a one-on-one battle between Shenandoah and the biggest asshole of the bandit group, Murdock played by Eduardo Fajardo. Murdock is a great heavy, with a sly, evil smile and a perpetually open shirt that allows his glistening blond-haired chest to breathe. Murdock’s over-the-top murderous attitude is a perfect foil to the stoic hero Shenandoah played by Anthony Steffen. Steffen hasn’t quite solidified his classic hard stare as seen in later films No Room To Die & Django the Bastard, but it’s clear he’s working on it and trying to perfect it.

Director Mario Caiano does a good job overall, with little strokes of brilliance here and there mixed in with some really average, uninspired filmmaking. Overall it adds up to an enjoyable film with a well-told tale, but it never reaches its full potential because the filming isn’t quite iconic or interesting enough to garner any real response. I’ll probably forget most of this movie within the next few days, but when it’s good, it’s good, featuring great overhead shots of a poker game and fantastic uses of tight, extreme close-ups in the tensest of moments to really sell the emotions playing out between the characters. Obviously these close-ups are taken from Leone’s playbook (and he does it much better), but I’ll take what I can get.

And don’t worry, A Coffin for the Sheriff also sports the requisite Western gunfights, saloon brawls & dudes falling out of windows and off of rooftops. It’s a fun, well-made film (for the most part) and one that genre fans should enjoy, even if it is on the more clichéd and obvious side of things.