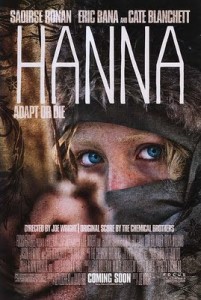 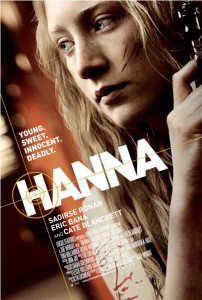 Unfortunately not, Voice in my Head. In fact, the film just continues to work its way through one mediocre scene after another, filled with some of the most juvenile and ridiculous scenes I’ve watched in a while. Truly a PG-13 film made for thirteen-year-olds. Ironically, I happen to be listening to Megadeth’s latest album, Thirteen, while I type this up. I didn’t plan it, I swear.

Don’t take my word for it though, consider this scene and just how absolutely ridiculous it is. The German hired killer stalks Hanna and tracks her to the campground where she is staying. She’s not at the camp now though, so when the killer opens the tent and shines his flashlight inside, only a young English boy begrudgingly opens his eyes. The killer then tells him to go back to sleep in German and the kid obliges, despite being English and not speaking German. Oh whatever, I can dismiss that as a groggy kid that woulda gone back to sleep regardless, but the next moments are unforgivable. After closing the tent, the killer and his wingmen walk off-frame in defeat. Immediately after they exit frame and in the same shot, Hanna and her new friend enter from the back and walk up the tent, loudly laughing and talking. Do the trained assassins see or hear her entering the tent that they just investigated? OF COURSE NOT, BECAUSE THIS MOVIE IS FUCKING STUPID.

The acting is fairly good throughout, with Cate Blanchett being a little too close to her awful character from Indiana Jones and the Kingdom of the Crystal Skull for my liking, but she fills the villain role well. Eric Bana is good when he’s around, but this is really Ronan’s film. She’s great as the cold and calculating Hanna, and it’s a shame she’s not in a better film. Hanna not only disappointed, it bored me to tears with its meandering, juvenile storyline. There’s no subtlety, there’s no tension, there’s nothing but an incredibly flat, boring film. And I didn’t even get into the bullshit uses of CGI in the fight scenes, or the fact that Western filmmakers always think that shooting said fight scenes in extreme close-up is the best idea. Fuck this movie.