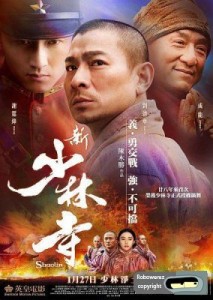 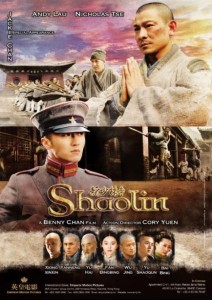 Just in terms of Andy Lau as the hero vs. Jet Li, I bet you can figure out who I prefer. Lau isn’t known as a martial artist, so he seems like a strange choice for the role at first glance. When watching the film though, it’s clear that director Benny Chan was looking to take Shaolin in a more dramatic direction and Andy Lau provides a strong foundation to that dramatic core. His acting is excellent, as you’d expect from someone with as long and as illustrious a career as Andy Lau. His fight scenes are actually pretty damn good too, and I was not expecting that at all.

In fact, all the action sequences are great. It’s impressive to see such a big-budget, lavish Hong Kong production focus on traditional martial arts and old-school wirework. There’s very little obvious computer enhancement and most of that comes in backgrounds or moments away from the action. The fighting itself looks to be achieved purely through the human spirit and a crack team of wire experts. As such, the fights themselves have that fantastic 90s Hong Kong feel and the filmmaking echoes this quality, choosing quality editing and shot selection that work with the choreography to create kinetic, exciting action scenes. Imagine that!

Jackie Chan has a small role as a chef and he does a great job both dramatically and in his single fight scene. The fight came unexpectedly and was a delight to watch, as Jackie pulled all kinds of cooking techniques into the fight in classic Chan style. It’s a short scene, but one that Chan fans will enjoy, and if you don’t enjoy the work of Jackie Chan I honestly don’t know what to tell you. I thought for sure he was in this film simply to throw him in the trailer and capitalize on his name for the poster, but he was actually used pretty well and added a quality supporting character to the film.

There’s also a load of child actors and martial artists that fill out the ranks of the Shaolin monks that are nothing short of awesome. One scene in particular stands out where Andy Lau finds a small boy training at night in the cold. When asked, the boy says he trains because of the cold, in order to stay warm and invites Lau to join him. They practice their form in wonderful unison, as the abbot and Chan look on. It’s a great scene and one of many that highlights the fantastic cinematography on display here. Hong Kong filmmaking never looked this good in a classic Hollywood sense, with swooping crane shots and grand vistas, and I hope that the trend continues (as long as there’s substance to go along with the pretty pictures).

Shaolin isn’t everything I hoped it to be, and it’s a bit disjointed in the beginning, but it pulls itself together rather nicely much like the main character of the film. It’s a drama/action hybrid that works fairly well, although my inner voices screamed for more action. The action that’s here is great and the film has lots of awesome scenes, but I think a bit of pruning could have helped it move along quicker. In the end, if you enjoy martial arts films I would definitely recommend Shaolin. It’s not perfect, but it’s worth it.