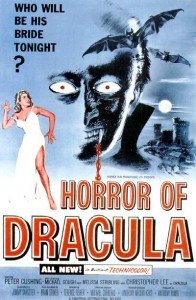 The story here is quite shifted from the novel and other adaptations of the work. Here Jonathan Harker is a man knowledgeable of Count Dracula’s supernatural nighttime activities, and has come to his castle to kill him with a stake to the heart. Normally such a major shift in the story would be preposterous and laughable, but it’s handled with such grace and deft skill by longtime Hammer screenwriter Jimmy Sangster that it’s instantly believable and accepted. I could go on with the major changes, but a list of redone story points excites no one. Suffice it to say that the overall story is essentially the same, but a lot of stuff along the way is different. This was one of my favorite aspects of The Curse of Frankenstein, and the formula doesn’t disappoint in Dracula either.

My main issue with this film is that it’s a little slow. It tells its tale very well and it does its best, but I couldn’t help but fading into random brain wanderings while watching the middle section of the film. I’ll admit that I’m very familiar with the Dracula storyline though, and have recently watched Dracula: Dead and Loving It which takes many of its story points directly from this version of Dracula. That being said, the climax of the film is outstanding. It is exciting, it is gross, it’s everything I could ever want in a vampire film finale from 1958. Maybe it was the building tension of the entire film finally released that excited me so, but I couldn’t help myself from yelling out at the screen and being thoroughly engrossed in the proceedings.

On the filmmaking front, Dracula is another incredibly well-made, low-budget horror film. It’s incredible to consider the small amount of money that went into these and the resulting final product. Dracula features some gorgeous set design, especially Dracula’s castle with its spiral pillars and colorful, marble floor with an inlaid zodiac wheel. Quality production design coupled with a confident director makes for a visually impressive, gothic horror film that is sure to delight. Director Terence Fisher again shows his skill in moving the camera around the well-dressed sets and his editing is second-to-none. Many sections of the film play out without dialogue, existing solely as pieces of visual filmmaking with each cut intensifying the emotions and the tension in the scene.

Dracula might not have wowed me in the same way that The Curse of Frankenstein did, but I loved it just the same. From the very good, if melodramatic, acting, to the tension building use of editing, to the scene-stealing sets, Dracula has all the elements in place. If you’re a fan of classic films, definitely give this one a go. And non-horror fans, don’t let the Horror label stop you! I wouldn’t be surprised if this film or The Curse of Frankenstein were good enough to make a genre fan out of a non-believer. They both combine classic film aesthetics with the budding, bloody horror genre to great effect, resulting in satisfying, wonderful films for all to enjoy.

Come back tomorrow as I take a look at the next episode from Showtime’s Masters of Horror series, the Stuart Gordon directed H.P. Lovecraft’s Dreams in the Witch-House! What is it with this series and long titles? And next Thursday will bring the luminous full moon as I take on Hammer’s The Curse of the Werewolf!