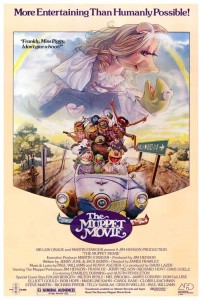 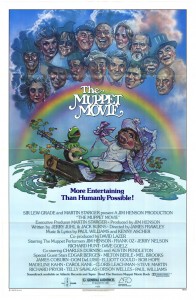 Unlike the most recent film, the focus here is completely on the Muppets the entire way through the film. The humans are mere window dressing, popping up in fun cameo roles every few minutes to keep the film fun and exciting for the adults who might be a little too hard-hearted to enjoy a film starring talking puppets. There’s only a couple of human characters that get more than one scene, and even these villain characters are only there to help drive the story along and give Kermit something to stand up to in order to realize his full potential as a frog.

But I really don’t want to make this another rant about how the old Henson-led Muppets are better than the new Muppets, so I’ll do my best to restrain myself. Anyway, the puppeteering here is incredible. The work is so great and absolutely seamless that it’s easy to get sucked into the film without thinking about how they did it. Puppets are driving cars, riding bikes, running through fields of long grass: the sky’s the limit here and Jim Henson’s imagination was brimming with creative solutions to achieve whatever the film’s writers cooked up. I know I’m a huge fan of puppets, so I’m possibly overselling it, but when I say the work is remarkable, I mean it. This is one of the only aspects that I felt they nailed perfectly in the new film, and to see this one again reminded me just how emotive and impressive the Muppets always were. They were popular for a reason, because instead of being simple puppets behind a makeshift stage to amuse young children, the Muppets did anything and everything you could do, including dream big. They transcended their puppet nature, and I think therein lies the inherent draw of the characters; they show us that with imagination and hard work anything is possible.

This time around I also noticed that a lot of the things that made it into this movie would never, ever make it into a Disney-fronted Muppets film made nowadays. Things like Nazi doctors with brain-altering machines of torture, alcohol references and off-key singing. The singing I found especially interesting as I had never noticed it as a child. It’s only in specific cases and with certain characters, but it’s always done for comedic effect and, I think, to prove that even if you’re not perfect you can still find joy in something and share that joy with others. There’s something that’s so heartwarming and charming about this concept, and while I never actively thought about it as a kid, I’m sure it had a profound effect on me. I’ve come to call this quality “ragged glory,” after one of my favorite Neil Young & Crazy Horse records, and when it’s done from the heart there’s literally nothing like it. It’s powerful, deep, soul-wrenching stuff that speaks to you on a level you weren’t even aware of. The new Muppet film is completely devoid of this quality, instead white-washed and perfectly pitched, and now I realize exactly why that felt so wrong.

The Muppet Movie is a technical achievement, and it remains a truly heartwarming and charming experience. Even in my adulthood, I found laughter, joy and a lot of sweet moments in the film that I had long since forgotten. It’s been years since the last time I watched this, and I’m really glad to have seen it again. The songs are fun and plentiful, the jokes are fast and still hilarious, and the Muppets continue to hold a special place in my heart.