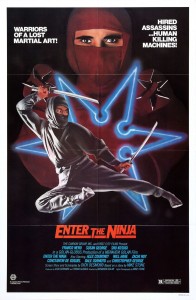 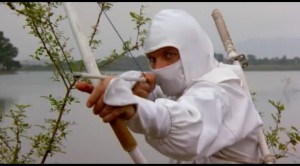 The opening ninjutsu sequence is easily the best ten minutes in the entire film. After an exciting opening credits with ninjas displaying their martial skill against a stark, black background, the film begins with a ninja clad in white going toe-to-toe with another ninja all in black. What follows is a thrilling chase sequence with the white ninja doing his best to thwart the murderous intent of the black ninja and his team of skilled secondary ninjas in red. From backflips out of trees and slow-motion jumps off of waterfalls, this sequence has everything a ninja fan could want. “Wow, everyone tried to steer me wrong!” I thought to myself.

After this sequence though, the film quickly becomes your standard 80s “little man fights for his home against the wealthy landowner who’ll stop at nothing to acquire it.” This is all well and good, I’m always down for some fun 80s clichés, but Enter the Ninja is just bad. It’s boring through most of this section and while the intro promises tons of badass ninja action, it never truly delivers. Even with the expectations removed, it’s a bad action film and one that has few saving graces. Thankfully, Sho Kosugi is fucking awesome every time he’s on-screen, but unfortunately he’s only in the opening and most of the finale. Franco Nero holds his own as a pseudo martial artist, but I much prefer him dragging around a coffin than high-kicking henchmen in a Filipino bar. Honestly, he does a lot better than I expected him too, but I’d just rather see someone else in the role. 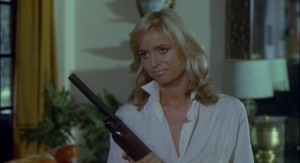 Susan George plays the lead female character, the wife of Nero’s war buddy. Her character is interesting to me given that I just watched her in a similar role in Peckinpah’s Straw Dogs. In that film, she played a promiscuous female frustrated with her husband’s focus on his work instead of her. She had a wild sexual desire that he couldn’t or didn’t know how to fulfill. She ends the film with a shotgun in hand, defending her husband and helping to defend their home. In Enter the Ninja, her character is introduced with a shotgun in hand, defending her husband and their home. It is later revealed that her husband is impotent and cannot fulfill her wild sexual desires, of which Nero gladly obliges in a scene that is only suggestive of what has occurred, instead of the explicit rape of Straw Dogs. Perhaps it’s just a coincidence, but I found this to be quite amusing and I’m glad I ended up watching the films in the order that I did.

Enter the Ninja ends up as a failure because at its heart, it isn’t a ninja film. When it does feature ninja action, it’s fantastic, but still not on par with later films such as American Ninja or Pray for Death. To me, Enter the Ninja also has something of a James Bond feel in its villains and their plans, and how they ineptly handle said plans. I’ve always stated that the beauty of James Bond is that they are simply big budget B-movies mostly done right, and Enter the Ninja is perfect counterpoint to this sentiment. This is the James Bond ideal in its natural B-movie habitat and as such, it is far less successful than it should be. I enjoyed watching it though, and sometime soon I look forward to diving into the genre’s defining classic, Revenge of the Ninja!