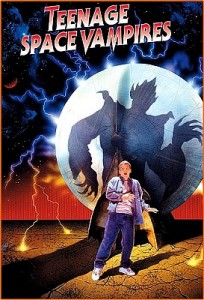 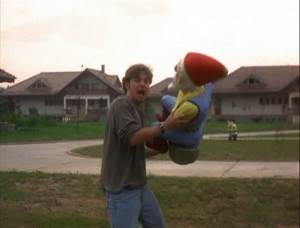 If the first few minutes of Teenage Space Vampires offer some hope for the rest of the film, it quickly becomes clear that the rest of the film won’t pay off. It starts to unravel only ten or so minutes in, when Bill and his buddy have their first run-in with a couple of badly dubbed bullies at school. I’m all for laughing at bad dubbing, but this is so poorly done that it transcends any comedic value it might have had. This was made during the era when most of Full Moon’s stuff was being produced in Romania to keep production costs down, and apparently there weren’t any actors without thick Eastern European accents, because literally every actor, save the leads, are over-dubbed. The voices are all pretty average and nondescript too, so there’s nothing to do here but be annoyed and bored. Honestly, I don’t know that the movie would have worked any better if it had perfect dubbing, or even the actor’s real voices, because the script is just off-the-charts horrid.

But let’s focus on the positive! There’s gotta be a few good things to take away from a movie called Teenage Space Vampires, right? Early on in the film, when I was still under the impression that it might be good, there’s a very cool looking scene in the classroom. The teacher gives a lecture on the history of the town, with the lights down and the beam of a projector throwing images from the past onto the front wall. Light streams in from the outside windows as well, in thick, misty shafts that instantly reminded me of the newspaper room scene in Citizen Kane. Yes folks, I just connected Citizen Kane with Teenage Space Vampires. Is it too much to ask that this review comes up when someone googles Citizen Kane? I can only hope, I just wish I could see the look on their faces when it does. 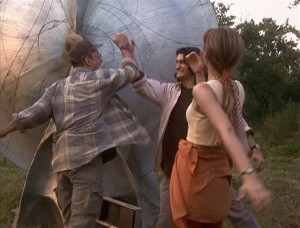 There’s also an animatronic gargoyle that stands watch over the spaceship, his face twisting to observe as Bill rides away on his Huffy™. It’s a great looking effect and it looks so real that I had to back it up to catch it again. Unfortunately, because it was so awesome, they felt the need to throw it into the movie a few more times, but each successive time it betrayed the genius of the initial use. Evidently the gargoyle was designed to do one very specific movement, so after the third time you’ve seen it do the same thing, the magic is gone.

Probably my favorite moment of the film though, and one of the biggest WTF moments in my recent cinematic memory, is the scene in which Bill grabs one of the old lady’s GIANT lawn gnomes and throws it at the spaceship. It sails through the air and disappears in a shimmering green glow, right into the ship! The dudes from S.E.T.I. that have come to investigate the ship see this, look at each other and then instantly begin yelling and high-fiving each other. It’s fantastic.

Make no mistake, Teenage Space Vampires is a piece of shit. It’s horrid in multiple ways and it shares none of the charm of the first Moonbeam (Full Moon’s line of kid’s movies) I watched, Mysterious Museum. It has a couple of fun moments, and Bill’s sister (played by Lindy Booth) is beautiful, but it’s not nearly enough to make this one worth recommending.

Next week I’ll be jumping into Empire’s 80s comedies in an effort to mix it up once again, with the out-of-this-world girl band flick Vicious Lips! BUT WAIT, I may be receiving a copy of Evil Bong 3 shortly, so if that comes, everything else will be pushed aside!