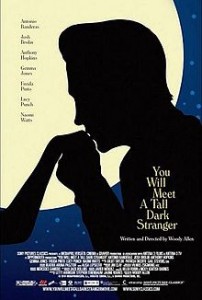 To call You Will Meet A Tall Dark Stranger a comedy is a complete misnomer, and going into this expecting the typical Allen farce will be a rude awakening. This is much more dramatic and serious, but with a transparent sheen of Allen’s comedy. I hate to use the term dramedy, but it applies, although “slice of life” may better serve the film as we all know that life can be a series of disappointments punctuated by brief moments of comedy. This is Woody Allen working in a very existential place, so now knowing this, I understand completely why a lot of people didn’t enjoy it. It’s also devoid of his typical biting wit, which is the most disappointing part to me, as this aspect is a big reason why I love Woody Allen’s films.

You Will Meet A Tall Dark Stranger is a very challenging film, leaving many story threads open and asking the viewer to garner meaning from them for themselves. As the film opens with a quote from Shakespeare about life being sound and fury without meaning, perhaps this is Allen’s point with his ending. This film and its ending are in stark contrast to Allen’s next film, Midnight in Paris, in which everything is spelled out and the comedy is much more prevalent. You Will Meet A Tall Dark Stranger also shares some of its spirit with Allen’s previous film, Whatever Works, as it explores how different people get happiness from their lives in various ways. Allen’s ultimate point here is that the delusional and faith-filled are happiest in life, despite the fact that they are ignoring its realities. It’s a tough pill to swallow, but one that makes total sense to anyone that’s been around the block a few times. Like the end of Whatever Works, we are left to say, Whatever works!, and be happy for the ones that have found something worth keeping.

The acting is great as expected from the roster of A-List stars Allen assembled. Josh Brolin was the most interesting actor to me, as he was clearly in the traditional “Woody Allen” role, but never once did he play the role as Allen. In every movie Allen himself doesn’t play this role, the actor in question seems to take on the mannerisms and verbal meter of the writer, but Brolin remains himself despite the obvious Allen wardrobe choices. This is neither here nor there honestly, but it was very interesting to me. I always imagined that Allen was consciously directing his male leads to be more like him, and perhaps this is him deciding to go in a different direction. It could also be that the traditional Allen character does not fit into the more dramatic films, as Allen as actor was generally absent from those pictures. I’ll admit I haven’t seen most of the Allen dramas so I can’t comment on the character in them, but it is an interesting hypothesis, and one that would explain the character here.

Allen’s camerawork is fantastic and beautiful as always. There are a number of handheld conversations in apartments where the takes go on for minutes at a time, the camera following characters in and out of rooms & down hallways. When the camera does stop amidst these frenzied takes, it always lands on a beautifully composed image, impeccably laid out. These are obviously not the product of chance and these scenes must have been a nightmare to block and setup. I remember remarking in my Midnight in Paris review that the handheld in it was impressive, but the handheld work here is leaps and bounds more inventive and exciting. Allen also uses a very chaotic handheld to punctuate a moment that Anthony Hopkins has near the end of the film. The shaky frame is in stark contrast to Allen’s usual careful filmmaking, but it serves the narrative beat perfectly.

You Will Meet A Tall Dark Stranger is a flawed film overall, but one that offers a lot to ponder for the existential viewers in the crowd. A lot of the narrative is predictable and slow-moving, but the film remains charming throughout and I’m glad I finally checked it out. I expected a film much more literal to the title, about Antonio Banderas sweeping Naomi Watts off her feet after a chance alleyway meeting, but I’m much more pleased with the film I got even if its poetic punch isn’t always on the mark. Why ask Woody Allen to continue making the same romantic comedy when he can deliver challenging and thought-provoking cinema such as this from time to time? The mind boggles.