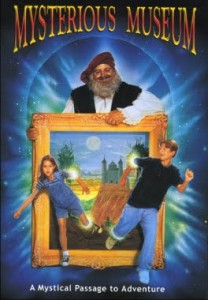 When older sibling Kim babysits her younger brother and sister, she naturally takes them to her workplace… a mysterious museum! As the kids explore the varied alcoves and wings of art history, they come upon one distinct painting that is supposedly haunted. One thing leads to another and before they know it, Ben and Kim are sucked into the painting and the year 1632! In order to return to their time they must find go out on a quest for the magical jewel of Polaris, but also hunting for the gem is the evil lord Falco (Adrian Neil), who possesses serious magical skills not to be trifled with.

A.J. Trauth, who later went on to success on the TV show Even Stevens with Shia LaBeouf, is okay here in his first acting gig. He plays a totally unlikeable character that only moderately redeems himself, so he’s hard to like, but I think that was the point. His line delivery is particularly ridiculous at times and added some old-fashioned B-Movie laughs. Future General Hospital regular Brianna Brown is also seen here in her first acting role and does a much better job than Trauth. To be fair though, she’s in a lot less of the film and her part seems like it would be easier played than Trauth’s. The smallest kid, Megan Lusk, went on to do not much else, but that doesn’t stop her from being cute and only slightly annoying here.

The big question is, does this kids friendly film feel like a Full Moon movie? Absolutely and completely. It’s literally a Full Moon movie in every way except the main characters aren’t old enough to drive. So when Full Moon makes a PG movie what are they going to replace the horror movie deaths with? If you said tons of fun 90s video FX, then you win a goldfish in a plastic bag! And what a load of fun these 90s video FX are! Much more fun than a goldfish in a plastic bag! From the evil lord shrinking an uncooperative peasant, to the bulging, throbbing haystack that serves as a dimensional portal, Mysterious Museum is bursting at the seams with entertaining special FX. Sure, they’re low-budget and they look like it, but I just can’t argue with a dude shooting shrink rays out of his fingers. Sue me. 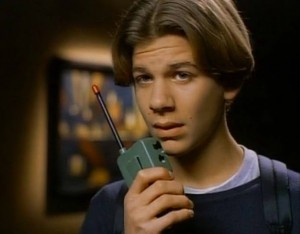 Directed by Full Moon vet David Schmoeller, this has to be one of the most enjoyable films of his I’ve seen yet. Technically, there’s an over-reliance on closeups and it’s not the most interestingly shot film, but it gets the job done and it’s a lot of fun. The most inspired directorial moment is probably the sepia-tinged flashback that details how the jewel of Polaris was separated from its staff. Perhaps I’m just a sucker for black-hooded wizards exhuming long-dead corpses and stealing their jewels though, so your mileage may vary.

The climax of the film is a smaller scale version of the final trials Indiana Jones must face in order to reach the Holy Grail. I am a big sucker for anything involving traps and trials, so I was thoroughly enjoying this section, despite the fact that it’s not everything it could be. It is the perfect example of that fine line between trash and art though, as one of the trials involves Ben jumping a never-ending fire chasm in his roller blades, which is equally ridiculous and awesome at the same time. A simple jump across a fiery gorge could work in any fantasy film, but the addition of the roller blades instantly marks it as trashy to most. I would argue that the roller blades are the key reason why it’s a great moment though, and one that’s surprisingly 80s-feeling for a film made in 1999. It further illustrates to me that sometimes a dual opinion is necessary of stuff like this.

I’m pretty sure kids nowadays wouldn’t bother watching this, but if your kids happen to harbor a strong love for low-budget B-movies, then this is the kinda stuff they’ll kill for. Even if you don’t have little ones, this is a fine B-movie that those who enjoy Full Moon’s lighter films will surely get a lot of enjoyment out of. I mean, how can you not like $9.99 walkie-talkies working crystal clear across an inter-dimensional divide? In some ways this kid-friendly version of a Full Moon movie is even more successful than a traditional Full Moon movie, as their horror films have always been somewhat childish and lite on gore, but in a kid’s film these no longer become faults. The biggest failing point of this film though is its length, or its perceived length. The multitude of FX helped my enjoyment of the film immensely, but it does drag on in the last half hour or so. Even still, Mysterious Museum is quite a fun kid’s film.

Next week if everything goes as planned, I’ll be reviewing Teenage Space Vampires, another Full Moon kids film. There’s a distinct chance that this will slip to the following week though, so I have the Empire film Ghost Town on tap just in case. See ya next Tuesday!