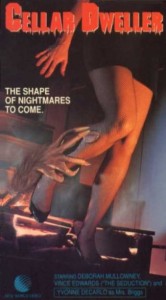 Needless to say, one of the students unknowingly unleashes the power of the beast on the school and then we watch as they get picked off one by one. What’s interesting about Cellar Dweller is that in addition to being an 80s horror flick, it’s also an homage to EC Comics. The tone throughout the film is somewhat light and while there are numerous elements taken from The Evil Dead (Necronomicon, Monster first-person cam from the woods to the front door of the cabin, etc.) it never feels specifically like a rip-off of that film. It’s a bit more than a tame homage though, as the final confrontation between our heroine and the beast is truly exciting and tense filmmaking, the claustrophobia of the basement adding to the intensity of the encounter. 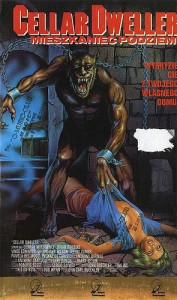 Director John Carl Buechler does a great job behind the camera, experimenting with the editing of the student’s death scenes by cutting in shots of the freshly drawn comic panels of their deaths. True, that’s not a revelation, but it felt fresh, interesting and unexpected whenever it came up. Buechler also did the FX for the film, proving once again that a director who understands special FX can do great things with them. The budget here is pretty low, so Buechler never gets to really branch out his imagination, but when he does let it loose it’s great stuff. For the most part it’s just a dude in a monster suit, but the Cellar Dweller’s face looks to have some motorized controls for the mouth which add a hint of realism along with a great Elvis snarl. My favorite moment though comes when the monster attacks the private eye turned Raymond Chandler wannabe. The monster swipes its big, nasty paw at the writer’s head and it rips clean off, the freshly decapitated head smacking hard against the nearby wall in great gory fashion. It’s a moment FX fans will want to relive again and again, and through the marvels of rewind technology, we can.

In addition to telling its monster tale, Cellar Dweller also tries to lampoon a bunch of art school kids run amok. It never does so in a very pleasing or especially biting way, but the students are over-the-top enough to represent larger stereotypes within the culture. This is the 80s so there’s the performance artist who apparently specializes in aerobics, the video major who hulks around a big VHS camera everywhere she goes, etc. The whole cast does a good job with special mentions going out to our heroine Debrah Farentino, Yvonne De Carlo and Jeffrey Combs in a fun intro cameo.

Cellar Dweller isn’t all that good, but it’s not a bad film by any means. The story and characters are interesting and fun, even if they leave a few plot holes wide open. The film’s tone is definitely lighter than you might expect from a film titled Cellar Dweller, but it succeeds in creating a good horror movie atmosphere. If you’re looking for a bit of low-budget 80s fun in the style of Tales from the Crypt, give it a shot.

Next week, I’ll be checking out Renny Harlin’s second feature and only film for Empire International, 1988’s Prison with Viggo Mortenson!