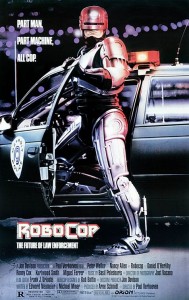 This all led me to re-watch the film myself and even I was not prepared for just how good this film is. I watched it twice in the space of a couple of days. Beyond the cool gun and all that macho shit, it’s actually an impeccably well-made movie. There are loads of incredible Steadicam tracking shots, most notably during the opening section of the film in the police locker room and in the OCP board room. Paul Verhoeven’s shot selection and framing is perfect and RoboCop is easily one of the best edited action films of all-time. It even got nominated for a Best Editing Oscar if you can believe that! I’d buy that for a dollar! 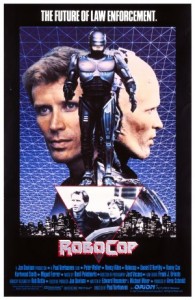 There’s also the choice to show the creation and activation of RoboCop through the first-person perspective of Murphy/RoboCop. Along with the humanizing intro section of the film, this first-person aspect allows the viewer to throw themselves into the mind of RoboCop. It also increases the intrigue and mystery as you experience the evolution of RoboCop, all without knowing exactly what he looks like. This isn’t a kick-ass 80s montage with metal licks a-wailin’, it’s played completely serious. It’s a stroke of genius that pays glorious dividends when RoboCop finally gets into his car and starts patrolling the streets, accompanied by the strong, powerful score by Basil Poledouris. His music is an integral part of the magic, responsible for as much of the awesome as Verhoeven’s filmmaking.

Peter Weller plays the role of Alex Murphy/RoboCop perfectly, never missing a single beat. In his early scenes as Murphy he is able to create a likeable everyman father character that the audience can identify with and care for. These scenes are key because if you can’t feel the pain of Murphy, the movie doesn’t work. It’s really a superhero movie in this sense, where a likeable guy is given superpowers and needs to come to terms with his humanity. Despite his transformation into RoboCop, Verhoeven keeps the story focus on the Murphy arc and how RoboCop must deal with his past. Our humanity is something that binds each and every one us and even after his death & resurrection as RoboCop, Murphy cannot escape his.

The special FX are yet another reason why the film succeeds. Rob Bottin does an incredible job of selling every aspect of the character and the city he inhabits. From the optical overlays of RoboCop’s computerized vision to the physical gore FX when ED-209 kills an OCP board member, everything is absolutely top-notch. One of the most impressive looking moments, even today, is when RoboCop removes his mask towards the end of the film. It looks real and utterly believable that this dude is fused with the circuit boards, his skin stretched tight over a robotic head, further selling the fantasy and the reality of the situation. Not to mention the badass suit! That thing is awesome!

I’ve always loved RoboCop, but re-watching it reminded me just how well-made of a film it is. Multiple pieces of the puzzle come together in the best way possible and create what is easily one of the best movies of the 80s. If you haven’t seen it, do yourself a favor and strap in for one hell of a ride. It’s a science fiction/action/revenge movie for the ages. The future of law enforcement is here and his name is RoboCop.