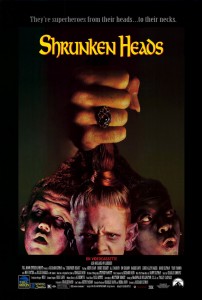 Expectations: High, the trailer for this looked awesome.

Zombies! Haitian Voodoo! Lesbian Mobsters! What’s not to like? Shrunken Heads is one of the most unique revenge tales you are ever likely to see. It definitely takes a while to get rolling, but when it hits its stride, it goes for the throat and never looks back. If you have any interest in horror comedies and voodoo practitioners you owe it to yourself to check out this decidedly campy piece of fun cinema!

Shrunken Heads starts off rather unassumingly, telling the classic tale of three boys who are bullied by a group of greaser assholes called The Vipers who roll around in a beat-up old station wagon just like your momma used to take you to school in. I’m not making this up! Anyway one of the bullied kids, Tommy, decides that he’s taken all he can stand and sets out to take down The Vipers. Shit gets real as fast as you can say snickerdoodle and before you know it, you’ve got three flying shrunken heads with superpowers looking for some sweet, sweet revenge. Damn, it doesn’t get much better than that. The superpowers themselves are something special. One head gets the power of the vampire, with fangs to match his lust for the blood of evildoers. Another head gets the power of lightning, blasting a straight shot of Edison’s finest into felon’s foreheads. The final head gets the power of… a switchblade in his mouth! Hahahaha! I love it. 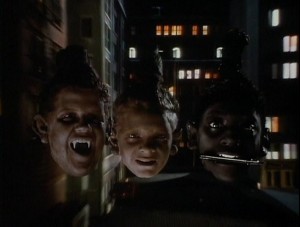 The special FX in Shrunken Heads are incredibly well done and plentiful for a Full Moon film. Virtually the entire second half is nothing but shrunken head shots, zombie makeup and awesome, sweeping motion-controlled shots of model cities. The shrunken head stuff is fantastic too. They don’t simply fly towards and away from the camera as they might in other films about vengeful shrunken heads. In Richard Elfman’s Shrunken Heads they fly in wild circles, figure-eighting around the screen and each other, soaring through the urban landscape they call home.

The acting is perhaps the weakest part of the film, with quite a few lines from the teen actors delivered without emotion or style. It doesn’t detract much from the fun though, so I can forgive some slight problems for all the zaniness the rest of the film contains. Julius Harris on the other hand is great as Mr. Sumatra, a Haitian newsstand owner. When it turns sours for the kids, Harris hits all the notes he should as the voodoo priest and really takes the movie to another level. Director Richard Elfman (Danny Elfman’s brother) shoots the film with a wonderful eye, filling the screen with technically impressive tracking shots, sweeping crane movements and the previously mentioned motion-controlled flying shots through the model city. This easily ranks as one of Full Moon’s most impressive films, so it’s no surprise to learn that this was Full Moon’s first theatrical release. Information is sketchy but apparently this had a small run in early 1994 before arriving on VHS like a standard Full Moon picture. It’s funny that I would come to this one now, just as Full Moon is finally taking a second try at a theatrical release with their newest film, Evil Bong 3D: The Wrath of Bong. If it’s playing near you, go out and support independent cinema!

So there you have it. Shrunken Heads, despite my very high expectations, succeeded in making me laugh, cringe and hoot in enjoyment at its wonderful blend of the macabre and the ridiculous. It definitely moves a little slow in its first half, but it rewards the patient viewer in spades. Highly recommended to horror comedy fans.