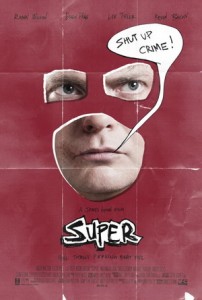 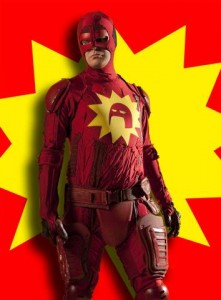 Rainn Wilson plays Frank, a diner cook who’s married to Sarah (Liv Tyler), a recovering addict who quickly fell for Frank while working with him at the diner. One day, a drug-dealing, suave Kevin Bacon shows up at the house looking for Sarah, and the next thing Frank knows, she’s out of his life. Frank takes the next logical step and becomes a crime fighter in order to get Sarah back. To read it back like that makes it all seem fairly ho-hum and ordinary, but Super plays out as anything but. I don’t want to ruin anything because a lot of the fun comes from the sheer lunacy of how shit goes down, but consider the scene in which Frank is touched by the finger of God. Anime tentacles come to life and hold him still, as his head is sliced open for a giant luminescent finger to lightly touch his brain. It’s an amazing, hilarious, gross scene in a film full of such things.

My main beef with the film is that for all its frank (rimshot) depictions of violence, there isn’t nearly enough gore to satisfy me! I had heard this was pretty violent, and the animated opening credits feature The Crimson Bolt busting through dude’s stomachs, showering the screen in guts and gore. Unfortunately, the rest of the film just isn’t that gory. Sure, there’s blood and the violence is very hard-hitting and shocking, but I expect more from an unrated film coming from a Troma alumni. Obviously, this is mostly my expectations clouding my enjoyment, which is never a good thing, but there were a number of good setups for a classic Troma head-crushing that went unused and I was sad. Oh well. I guess it’s hard to make non-gorehounds care about this guy if he’s stomping on criminal’s heads. Whatever. I would argue that the level of wrench-to-face violence is already turning off most people so you might as well crush some heads. Sometimes I wonder that I’m becoming rather sadistic watching all these gory horror movies, and when most reviews of Super seem to note how repulsively violent it is, and I’m arguing that they didn’t push it far enough, perhaps there’s some truth to that. Even if there weren’t any Troma-style head-crushings, at least Troma president Lloyd Kaufman got a small cameo. 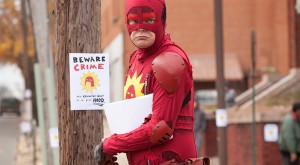 Speaking of cameos, James Gunn’s cameo as a TV Satan is perhaps the best “director in their own movie” cameo I’ve ever seen. It’s absolutely hilarious! I was the only one laughing at the showing I went to though, so I’m afraid the extremely over-the-top Holy Avenger Trinity Broadcasting spoof was lost on everyone else. Perhaps they were offended. In any case, they’re great! Nathan Fillion plays The Holy Avenger with luscious, flowing locks of hair to James Gunn’s horned, tongue-waggling Satan. It’s worth a re-watch just to see these parts again, and it’s also in these moments that Gunn’s Troma influence comes through the clearest.

Super is filled to the brim with all kids of wacky shit out of every part of the field. It’s hard to pin this movie down because it jumps around a lot between tones. The violence is hilarious, but gross and disturbing at the same time. If you can connect to Frank, his rampages as the Crimson Bolt will fulfill some of your own mental fantasies, but his actions rarely seem heroic or glorified. They are what they are, a crazy guy with a wrench trying to dish out justice, one swing at a time. 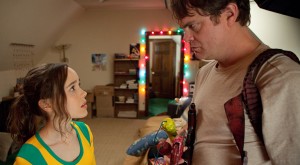 If the film was paced a little better, I would have loved it, but even still it’s pretty enjoyable. Rainn Wilson is perfect as Frank, fulfilling both the loser and the hero roles perfectly. Who would have thought that he could pull off the superhero thing, but fuck if he doesn’t look great in that Crimson Bolt suit. Ellen Page does well in her role too, elevating nearly all her scenes to moments you will be hard-pressed to forget. This is thanks in part to Gunn’s batshit awesome sense of humor and his well-written script, but Page really goes the extra mile and makes the part her own.

Overall, Super is a perfect movie for some, but I think most will find it too strange to really get behind. The tonal shifts throughout will throw a lot of people as well, as the film goes from uproarious laughter to stark violence very quickly and sometimes at the same time. It is a challenging movie in this way, but a bold one. It is a unique ride that should definitely find its audience once word gets around. Shut up Crime! The Crimson Bolt is in town!