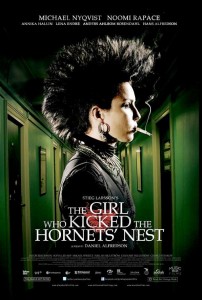 Expectations: Moderate. I enjoyed the last one pretty well.

Oh man, where’s my notebook? I seriously need a road map to navigate the ridiculously complex plots of these movies, and The Girl Who Kicked the Hornet’s Nest is probably the hardest to follow of the trilogy. It is also the most boring of the three as well. Y’know I was diametrically opposed to the US remakes of these movies, just on the simple fact that these films were just coming out and didn’t need a remake. After viewing them all, I can’t really argue with the desire to remake them. If they were tightened up and the dialogue was easier to digest, I think I could love these stories.

Noomi Rapace is once again fantastic as Lisbeth Salander. She spends a good portion of this film in the hospital recovering from the shitstorm that capped off the previous film, so she doesn’t have nearly enough time to kick ass. There’s also a lot of courtroom scenes that didn’t do anything for me either. I was hoping for a more thrilling film, like The Girl Who Played With Fire was, but instead I got an overly talky, exposition-heavy film to end an okay trilogy. Eh.