The character of the fat guy is a good example. He may not have even had a name, and literally every scene he’s in he’s either eating or talking about getting food. It became a genuine source of laughter, as I’m sure it was intended. One of my favorite of these moments with him was when they launch the contest and everyone runs off in search of the money. The fat guy first runs to the food table, loads up his arms, and then runs off to search for money. Even in this most crucial moment, where a lost moment could separate him from the million dollar prize, the fat guy still has his priorities locked on calorie consumption. He’s definitely a man who knows what he wants. The French girl is similarly defined by one trait, being nothing more than an accent throughout her stay in the film. You could look to these shallow characters as a major flaw of Spellcaster (and they are), but they actually work towards the charm of the film more than anything else.

The two main characters, a brother and sister, are the deepest characters of the bunch, but even they are only as deep as a puddle on a sunny day. To make up for the lack in character engagement, horror filmmakers generally hope for the best with some hi-octane thrills and the gory FX to match them. Spellcaster has shades of both, but it’s never enough to keep your complete attention. The potential here is great though, so it ends up being a more disappointing movie simply because they failed to completely utilize the resources at hand. 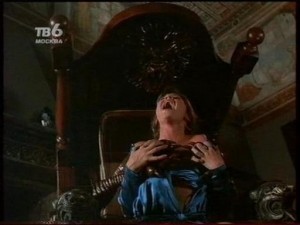 Overall the FX work by John Carl Buechler and team are great and inventive, lifting up any scene featuring them. From chairs coming to life to men turning to pigs, Spellcaster features all kinds of weird shit and it is all a joy to watch. There’s not a lot of blood and gore to be found, but they make up for it with the inventiveness of the FX. It does make the film a bit spastic though because for all its lunacy, Spellcaster lacks a central villain. The spellcaster of the title is definitely a presence and an influence, but he is unseen except for a hand over a crystal ball until the final scene of the film.

Which brings me to the ending. I’m a big fan of endings that work for the story. I’m not scared to be challenged because the ending differed from what I wanted to happen. In Spellcaster, the ending feels like a cop-out and is just plain weak, no matter how you slice it. With all the build-up surrounding the identity of the wizard, he needed to be a grand, spellcasting son-of-a-bitch ready to do battle. Instead he was a suave, smooth-talking Adam Ant. I am not impressed.

Spellcaster is a mixed bag in the truest sense of the phrase, featuring some great ideas, some inventive FX and a beautiful Italian castle location, while at the same time featuring poor scripting, lackluster characters and a weak ending. If you truly enjoy ’80s films, I’m sure that you will find a lot to enjoy as I did, but others will want to cast their magic someplace else.